Black Cat appears as villainess in an episode of the 80s Spider-Man animated series voiced by Morgan Lofting.

The Black Cat announces that she plans to steal the Maltese Mouse and challenges Spider-Man to try to stop her. Spider-Man first encounters the vilaliness when she attempts to rob a from a costume party, and webs her up, although she manages to escape.

After several encounters, they end up fighting at an amusement park, where Spider-Man captures her by dunking in her a pool by hitting a level with a ball. She is then delivered to the police. 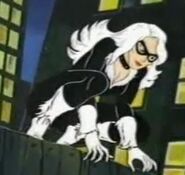 Humilated and captured
Add a photo to this gallery
Retrieved from "https://femalevillains.fandom.com/wiki/Black_Cat_(Spider-Man_80s)?oldid=141245"
Community content is available under CC-BY-SA unless otherwise noted.