Start a Wiki
watch 01:39
The Loop (TV)
Do you like this video?
The Bimbos (aka Östermalmsbimbos/svennar) are enemies from the 2009 PC game Pandaland, a Swedish made platformer.

There are two types of blonde bimbo, and they both dress in short white minidresses and low cut tops. One bimbo wears sunglasses while the other wears boots, but has no sunglasses.

The game is set in Södermalm, Stockholm, Sweden, where you play as "indie pop girl" Amanda Panda who has to rescue her kidnapped friends from an evil lizard called Björn (who looks a lot like Wart from Super Mario Bros 2).

As well as Björn, enemies you have to deal with include "tanned upper-class brats from Östermalm" i.e. the bimbos. The evil bimbos walk back and forth and will hurt you if you touch them. They can be defeated if you throw objects such as cherries at them. 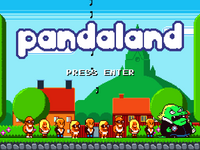 The villains chase the Pandas

Fanart of Bimbos (by 島国大和)
Add a photo to this gallery
Retrieved from "https://femalevillains.fandom.com/wiki/Bimbos_(Pandaland)?oldid=209847"
Community content is available under CC-BY-SA unless otherwise noted.