Start a Wiki
watch 01:51
The Loop (TV)
Do you like this video?
Billie is a villainess from the cartoon Mighty Man And Yukk, she appears in the 1979 episode The Perils Of Paulette. Mighty Man And Yukk is a segmented show from the animated series The Plastic Man Comedy Adventure Show.

She is the evil girlfriend of the villainous Handhead, and is desperate to be a big movie star. Billie dresses in a purple leotard/swimsuit with black high heel pumps and sunglasses. She and Handhead set up various traps on movie sets to try and kill the actress Paulette, so Billie can take her place. This includes replacing a mechanical shark with a real one, trying to cause an avalanche on a mountain set and cutting a plane in half that they think she is in.

Billie is perfectly fine with Paulette dying in order for her to become a movie star, in fact she even seems to enjoy trying to have her killed. This is shown when they replace the mechanical shark with a real one and Handhead says “I think she’s gonna take the bait”. Billie responds “You mean she’s gonna be the bait” and lets out an evil giggle, showing it’s not just business for her, but pleasure too.

Billie and Handhead are ultimately defeated when Yukk, the dog with the ugly face, shows his face to the villainous duo when they are flying a plane. His ugliness causes the plane to shatter into pieces and Yukk then captures the evil Billie and Handhead as they fall from the sky. In a later scene it is mentioned that Handhead was sent to jail, and although not confirmed, it is presumed that Billie will follow him. 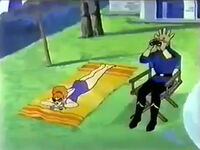 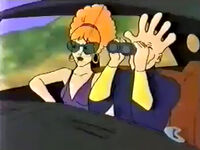 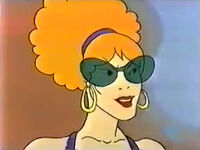 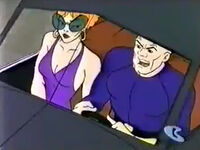 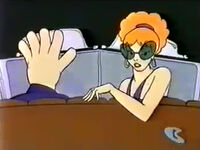 ...when she notices they're being followed by the heroes... 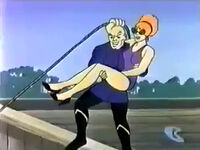 ...so Handhead carries her as they make a getaway 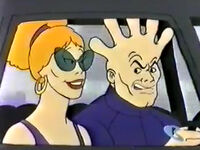 Handhead insists Billie will be a star actress 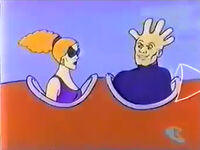 In a plane trying to cut Paulette's plane so she falls from the sky...

...but their evil plan is thwarted by the ugly dog Yukk 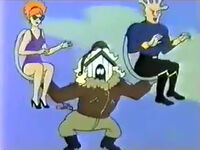 The evil Billie and Handhead are captured by Yukk
Add a photo to this gallery
Retrieved from "https://femalevillains.fandom.com/wiki/Billie_(Mighty_Man_And_Yukk)?oldid=154814"
Community content is available under CC-BY-SA unless otherwise noted.