Start a Wiki
watch 01:48
The Loop (TV)
Do you like this video?
Bianca Fleischer (Valarie Pettiford) appeared as a villainess in two 1997 episodes entilted "Honey, You've Got Nine Lives" and "Honey, I Got Duped", for the TV series, "Honey, I Shrunk the Kids".

Bianca was a scheming co-worker of Wayne Szalinski (Peter Scolari).  Wayne invented a neuron nudger, and Bianca told him not to show it to their boss Mr. Jennings.  She then set up a plan to destroy Wayne and steal his inventions.

At the end of the episode, everyone's brains were in someone else's body.

In the second episode, "Honey, I Got Duped", Wayne worked on controlling the cloning of himself.  One of his clones took his place at work.  Bianca became suspicious of his geniality.  She gave his clone a friendship bracelet that had a tracking device in it.

In the end, Bianca is defeated with her own gift wrapping machine.  She ends up going head first into the machine, and comes out gift wrapped and gagged all ready to be taken into custody by the police. 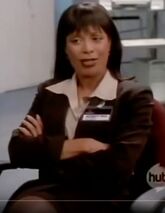 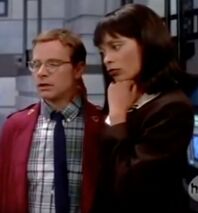 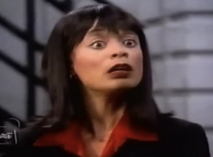 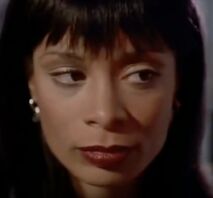 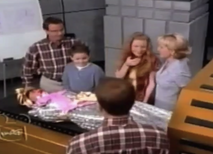 Add a photo to this gallery
Retrieved from "https://femalevillains.fandom.com/wiki/Bianca_Fleischer_(Honey,_I_Shrunk_the_Kids)?oldid=202188"
Community content is available under CC-BY-SA unless otherwise noted.