Bianca Bikini is a recurring antagonist from the 2016 reboot of The Powerpuff Girls. She is the leader of The Fashionista Gang. Bianca is a vain, domineering fashionista, who makes sure she looks beautiful, while she is committing crimes. She works alongside her monkey sister, Barbarus Bikini.

She was voiced by Lily Vonnegut.

Bianca made her first appearance in "Bye Bye Bellum", when she broke out of Albatross Prison, and set out to destroy The Powerpuff Girls. First and foremost, Bianca had to change out of her tacky horizontal striped prison uniform, so she broke into a clothing store, attacked the manager, and stole herself a beautiful new outfit.

Just then, The Powerpuff Girls came by, looking for a new assistant for The Mayor, following in the absence of Mrs. Bellum. Luckily for Bianca, her new look happened to be the perfect disguise for the girls not to recognize her. The girls thought she was a normal civilian, and hired her as The Mayor's new assistant. Bianca took advantage of her new role, by sneaking into the central control room for every power outlet in The City of Townsville, and cutting off the power to Albatross Prison. This allowed for her sister, Barbarus Bikini to escape, so they could both kidnap The Powerpuff Girls together. When they did, The Mayor heard on the news that his new assistant was rogue, and set off to save The Powerpuff Girls. When he did, the girls gave Barbarus and Bianca a beating, and sent them back to jail. 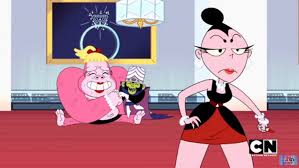 Retrieved from "https://femalevillains.fandom.com/wiki/Bianca_Bikini_(The_Powerpuff_Girls)?oldid=191341"
Community content is available under CC-BY-SA unless otherwise noted.