Start a Wiki
watch 01:48
The Loop (TV)
Do you like this video?
Bianca BelAir is a professional wrestler currently competing in WWE, where she portrays a villainess.

Bianca was signed by WWE in April 2016, and made her first appearance at an NXT live event two months later, establishing her heel persona with an in-ring promo. Her in-ring debut came in September 2016; a losing effort against Aliyah in singles action. Bianca made her first appearance on NXT TV on May 3, 2017, participating in a #1 Contender's Battle Royal, where she was eliminated by Billie Kay and Peyton Royce.

During the NXT TV tapings on June 23, 2017, the evil Bianca defeated Aliyah to qualify for the Mae Young Classic tournament. The match was uploaded on June 30, marking Bianca's official televised singles debut. Bianca defeated Sage Beckett in the first round of the Mae Young Classic on August 28, 2017, but she was defeated by eventual tournament winner Kairi Sane in the second round on September 4. On the September 20 edition of NXT, Bianca defeated Lacey Evans in singles action. On October 25, Bianca participated in a battle royal for an NXT Women's Championship opportunity at NXT Takeover: War Games; eliminating Rhea Ripley, Zeda, and Candice LeRae before being eliminated herself by eventual winner Nikki Cross.

Bianca in her ring gear 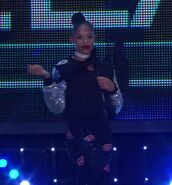 Bianca in Round 1 of the Mae Young Classic 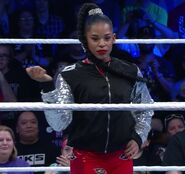 Bianca in Round 2 of the Mae Young Classic 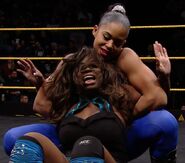 Bianca vs Luscious Latasha Allsopp on NXT
Add a photo to this gallery
Retrieved from "https://femalevillains.fandom.com/wiki/Bianca_BelAir_(WWE)?oldid=157365"
Community content is available under CC-BY-SA unless otherwise noted.