Start a Wiki
watch 01:51
The Loop (TV)
Do you like this video?
Betty (Deborah Harry) is a wicked witch for the final installment entitled "Epilogue" for the 1990 American comedy horror film, "Tales from the Dark Side: The Movie".

This portion of the movie wraps up all of the three stories in the film.  At the end, we begin to see that Betty is preparing a meal for her witching circle dinner party.  The meal calls for a boy to be prepared, which she has in the form of Timmy the newspaper boy.  We learn that Timmy had been asked in and forced into the pantry,  Betty made him eat cookies all day long in order for him to get fat.  He is located in a steel prison cell, and he is reading the stories that appeared in the film from a book entitled "Tales From the Darkside".

Betty becomes distracted by the tales Timmy begins telling her.  When he tells her he saved the best for last, and that it has a happy ending, she becomes a little irritated.  She tells him that it is too late for stories, and that none of the stories in the book have happy endings.

As Betty moves forward, Timmy begins to narrate his actions.  He throws some marbles on the floor which causes her to slip and fall on her butcher's block, impaling herself on her own tools.  Timmy releases himself and pushes her onto a cart and into her own oven.  The door closes, and we see Betty burning up.  The fil ends with Tiummy helping himself to another cookie and telling the audience "Don't you just love happy endings?". 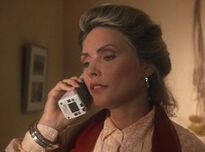 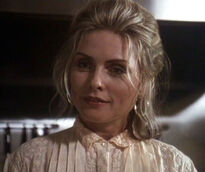 Add a photo to this gallery
Retrieved from "https://femalevillains.fandom.com/wiki/Betty_(Tales_From_The_Darkside:_The_Movie)?oldid=99487"
Community content is available under CC-BY-SA unless otherwise noted.