The Female Villains Wiki
Register
Don't have an account?
Sign In
Advertisement
in: 1990s, Barefoot, Bare Stomach,
and 29 more

Betty (Attack of the 60 Foot Centerfold)

Betty (Tammy Parks) is the rival centerfold model in the 1995 film "Attack of the 60 Foot Centerfold".

She is a jealous and spiteful rival to Angel Grace (J.J. North) who are finalists for the "Plaything of the Year" contest, along with Inga (Raelyn Saalman). The three have plenty of encounters where they are attempting to compete for the most gorgeous body in photo shoots. Betty seems to find a reason for taking her top off on several occasions. After getting a good look at the completion, Betty arrogantly states that she will win. She also insults Angel about her age and questions if her breasts are getting smaller.

The slimy photographer Mark (Tim Abell) tries to put the moves on each of the ladies without much success.

Betty later mentions to Wilson (Ted Monte), Mark's assistant, that she might sleep with the publisher, Bob Gordon (John Henry Richardson), who owns the magazine that is holding the contest. Wilson warns her she should probably stay away from him, since Mr. Gordon has a girlfriend who is insanely jealous.

The competition is rolled over to the beach mansion of Bob Gordon. This is when we first meet Gordon's girlfriend, who doubles as the maid for the mansion. Her name is Rosita (Nikki Fritz), who does her best to outshine the three girls....and is somewhat successful at it. At one time she threatens the girls with a shotgun when they sneak out of their rooms at night.

Angel has been secretly taking medical beauty enhancements headed by Dr. Lindstrom. Desperate to win, Angel overdoses on Lindstrom's formula and quickly grows to monstrous but shapely proportions. However, this increases Betty's jealousy over Angel's new found attention. She becomes irate when she hears because of the novelty of being a giant woman, that they plan to have Angel be the centerfold.

Betty does some super sleuthing through Angel's room and discovers her secret. As a result, she also takes the formula herself, causing her to also grow into an equally gorgeous giant. The two meet at a photo shoot, and Betty confronts Angel. They are both 60 feet tall at this point, and a catfight ensues, while Glenn is taking photos of the action.

Dr. Lindstrom and Dr. Joyce Mann (Michelle Bauer) rush to find a cure for the side effects of the formula. They arrive during the fight and attempt to tranquilize Betty, but it doesn't have any effect. In fact, Betty throws the dart which hits a running Bob Gordon.

The catfight continues into downtown Hollywood with the two rivals battling it out in the middle of traffic on Hollywood Boulevard. Dr. Lindstrom arrives with an antidote and sprays the two beauties down with the formula. They quickly are reduced to normal side, and left drenched in their once small bikinis, now acting as robes.

Angel is thrilled to be back to normal, and then realizes that her rival is still a bitch. Therefore, she clocks the sexy brunette, knocking her down into a heap on the street.

Mark goes out to console Betty and then attempts to do the same with Angel. Wilson who has feelings for Angel, quickly cuts in and knocks Mark to the grounds and ends up In a pile next to Betty. As Angel and the doctor walk away, Mark attempts to revive Betty with a kiss. Suddenly, there is a large bang, and the only thing we see is Mark's flaming shoes and Betty's black cloth. The two of them have internally combusted, due to the antidote formula.

Angel, Wilson, and the doctor are not too broken up that the two of them have been killed, since they were both shallow people, and deserved what they were getting. 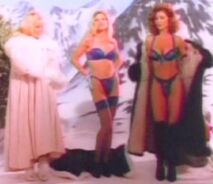 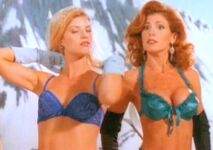 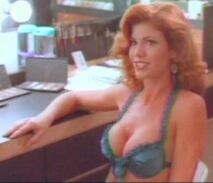 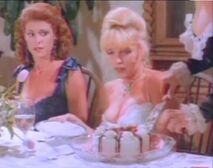 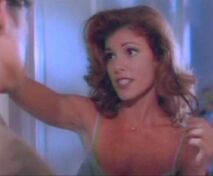 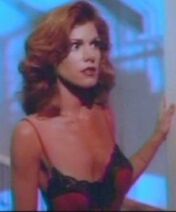 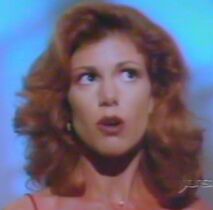 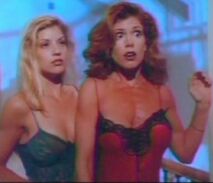 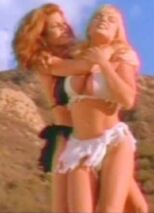 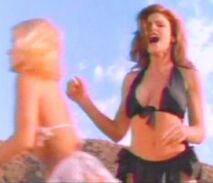 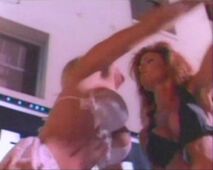 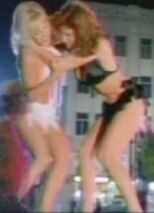 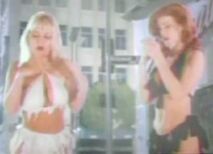 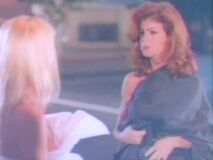 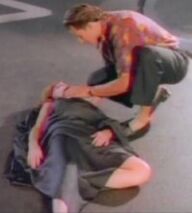 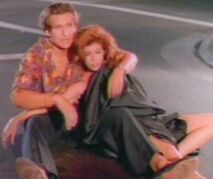 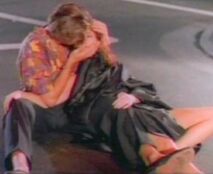 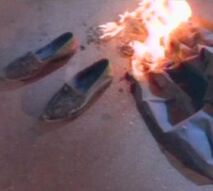