Bethany (Kiralee Hyashi) is a henchwoman in the 2011 episode "Morningstar Academy" for the TV series "Supah Ninjas".

Bethany was a henchwoman in the service of Ms. Morningstar (Paulette P. Williams).  Bethany was a member of two other girls who served as henchwomen, Clarissa (Daniella Monet), and Fiona (Allison Caetano).  Ms. Morningstar was the leader and owner of a Prep School, where she takes in foster girls and teaches them to steal, fight, and fend for themselves.

At the beginning of the episode, two men are loading an armored truck.  However, Clarissa approaches them and tells them that she has a flat tire.  The men offer to help, and suddenly Clarissa knocks them out by kicking them.  From there Ms. Morningstar and the other girls, Bethany and Fiona show up and steal a container of acid from the truck.

The next day we see Ms. Morningstar and the girls barge their way into the entrance of the Mint at Empire City.  In the line is Amanda, Cameron and some of the other students on a field trip.  Clarissa and Amanda's friend Kelly get into a catty arguement.  As Clarissa leaves, she smiles at Cameron, which doesn't go over well for the jealous Amanda.

Later in the Mint, Amanda and Cameron decide to go off on their own and have their own field trip.  While they are gone, Clarissa and the other girls use their ninja skills to take out the guards.  They then take the other students and guards hostage.  When a guide tries to call for backup, Bethany took a bangle and threw it at him to cut his bluetooth.

Cameron and Amanda noticed the takeover, and Amanda knocked out a janitor to take a disguise.  In the hallway, she ran into Bethany, who started to attack her.  After a short ninja catfight, Amanda took her bangle and snapped a picture with her phone.

Mike and Owen crawled through an air vent and were discovered by Clarissa, who nearly stabbed them with her hair pins.

Fiona then knocked Amanda out and tied her up.  When the other henchgirls arrived, Amanda learned that they planned on taking the printing plates to make their own paper money.  The girls use part of the acid they stole earlier to create a hole in the floor to escape via the sewers.

Amanda then used the bangle she stole from Bethany to cut the ropes she was tied up with.  She then confronted Fiona and defeated her after a short skilled catfight.  Amanda stole Fiona's prep school outfit, which included her plaid mini-skirt and blazer.  There is no evidence on how Fiona was left, but no doubt she was left tied up in her underwear or was replaced with Amanda's janitors outfit.

Amanda then takes Mike as a prisoner and pretends to be Fiona, as she locates Ms. Morningstar.  Mike tackles Bethany, and this is the last we see of her, as she is left knocked out on the floor.

Amanda was later able to defeat both Clarissa and Ms. Morningstar, and it is assumed that all the ladies were taken into custody off screen. 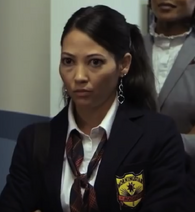 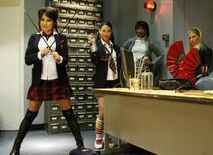 Add a photo to this gallery
Retrieved from "https://femalevillains.fandom.com/wiki/Bethany_(Supah_Ninjas)?oldid=202035"
Community content is available under CC-BY-SA unless otherwise noted.