Start a Wiki
watch 01:48
The Loop (TV)
Do you like this video?
Beth Raitt (Tricia Braun) was the hidden main villainess from "Where and When," the antepenultimate episode of Warehouse 13's second season (airdate September 7, 2010). She was the wife of Jonah Raitt, who was the editor of Where and When magazine back in 1961.

In the episode, former Warehouse agent Rebecca St. Clair revealed that Jonah had died at the age of 82, and she revealed that Jonah left behind a murderous legacy, as he was accused of killing his wife and three other women. The accusation included an artifact: a glass knife that belonged to Cinderella, which turned the user's victims into glass. Rebecca worked the case with her late husband, Jack Secord, but they never recovered the artifact, leading to H.G. Wells sending Pete Lattimer and Myka Bering to Green Bay, Wisconsin in 1961 as Jack and Rebecca, respectively, to complete the case.

Pete wanted to save one of the women, Roxanne, during their trip to the past, but his and Myka's encounter ended with Roxanne running off in a panic, only to meet her fateful doom when a cloaked figure stabbed her to death with the knife and then shattered her in pieces. When Jonah arrived afterwards, the pair realized that he wasn't the killer, and regarding Jonah's ties to Roxanne and the other two women, he revealed that they were his secretaries and he was working with them in his plan to take over the magazine and give them better opportunities. Pete, Myka, and Jonah went to the Raitt household fearing that Beth was in danger, but to their surprise, Beth turned heel by stating that she "took care of the other whores," revealing herself as the true killer.

As it turned out, Beth believed that Jonah was sleeping with his secretaries, and with her knowledge of the knife's powers, the villainess killed the first two women, and she donned her cloaked disguise and killed Roxanne as well. After her reveal, the evil Beth stated to Jonah that she thought he'd "get the message" with her actions, after which she knocked out her husband with a vase and held him up while asking Myka to shoot and kill him. Pete held the deranged villainess at bay, only for Beth to cement her reveal by taking out the knife and stabbing Pete's left hand. She even attempted to stop Myka from removing the knife, stating that it had to stay in so he can become a full glass figure, but Myka successfully pulls out the knife and saves her partner.

Beth and Myka ended up fighting over the knife, with the struggle ending with Myka stabbing Beth with the knife. As she was slowly dying, the villainess asked Jonah why he couldn't love her more, with Jonah answering by asking why she couldn't love him any less, as he watched Beth completely turn into glass. 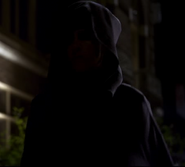 Beth in her villainous disguise 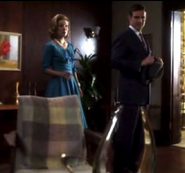 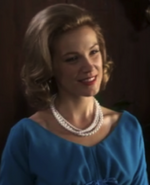 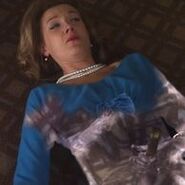 Beth as a glass figure

Add a photo to this gallery
Retrieved from "https://femalevillains.fandom.com/wiki/Beth_Raitt_(Warehouse_13)?oldid=135758"
Community content is available under CC-BY-SA unless otherwise noted.