Start a Wiki
watch 01:51
The Loop (TV)
Do you like this video?
Beth Phoenix is a former professional wrestler best known for portraying a villainess in WWE.

Beth's WWE debut came in 2006, but she would return as a villainess a year later after competing in OVW. She aligned herself with fellow villainous Diva Melina in the summer of 2007 before she began her pursuit of the WWE Women's Championship, which was held by Candice Michelle. Beth failed to defeat Candice at Unforgiven, but she would defeat Candice at No Mercy to capture her first Women's Championship. During her title reign, the evil Beth continued her alliance with Melina, which centered around their disdain over the Divas who have posed for Playboy. Beth's title reign ended in April 2008 when she lost to Mickie James, and her alliance with Melina ended less than a month later when she attacked Melina after costing her the title. Beth went on to defeat Melina in an I Quit Match at Extreme Rules on June 1, 2008.

Beth began an odd romance with Santino Marella during the summer of 2008, which included the pair defeating Kofi Kingston and Mickie James at SummerSlam to capture the Intercontinental and Women's Championships, beginning Beth's second Women's Championship reign. After leading the Raw Divas to victory over the SmackDown Divas at Survivor Series, Beth engaged in a feud with former ally Melina, which led to Beth losing the Women's Championship to Melina at the Royal Rumble in 2009.

Beth was moved to SmackDown in a seven-Diva trade that included all three brands (Raw, SmackDown, and ECW). The trade was orchestrated by guest hosts Nancy O'Dell and Maria Menounos; the latter Beth bullied into a match later that evening on Raw (a six-Diva tag team bout), which Beth lost. Beth made history at the Royal Rumble in 2010; becoming the second woman to compete in the Royal Rumble Match (Chyna was the first and Kharma would be the third). Entering at #6, Beth eliminated The Great Khali before she was eliminated by CM Punk.

After a year as a babyface (which included a third reign as Women's Champion in 2010), Beth became a heel once again when she attacked then-Divas Champion Kelly Kelly after winning a #1 Contender's Battle Royal on August 1, 2011. After the attack, the evil Beth proclaimed that Kelly's "days as the perky blonde bimbo are over," and later aligned with the villainous Natalya to form the Divas of Doom. Beth's title opportunity came at SummerSlam, where she was defeated by Kelly. She lost to Kelly again at Night of Champions, but would defeat Kelly at Hell In A Cell to capture the Divas Championship.

Beth held the title for the remainder of 2011 and the first four months of 2012. During her reign, her feud with Maria Menounos was reignited, leading to Beth teaming with a villainous Eve Torres in a losing effort against Maria and Kelly. Beth lost the title to Nikki Bella on April 23, 2012. She would later feud with the returning Layla over the title, only to be defeated at Over the Limit and No Way Out.

Beth spent her last months antagonizing Kaitlyn, due to the fact that Kaitlyn actually believed that Beth attacked her at Night of Champions. She was defeated by Kaitlyn on the October 18 episode of Superstars, and in her last match in WWE, Beth was defeated by AJ Lee, but went on to defeat AJ after the match was restarted by Raw's evil General Manager Vickie Guerrero. Despite her win, Beth was fired for not defeating AJ quick enough. 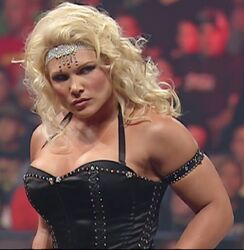 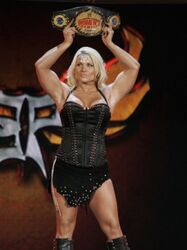 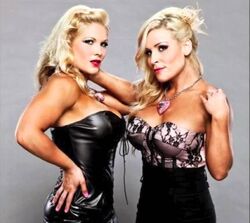 Beth with her evil Divas of Doom partner, Natalya Neidhart 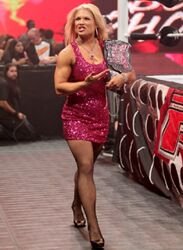 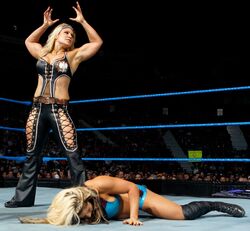 The evil Beth Phoenix displaying her dominance over Kaitlyn 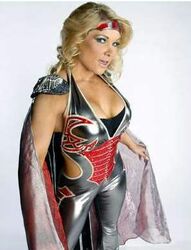 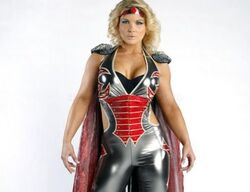 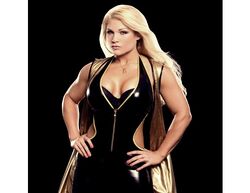 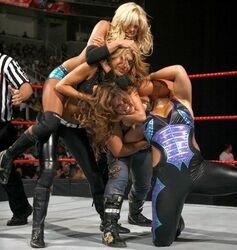 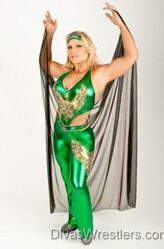 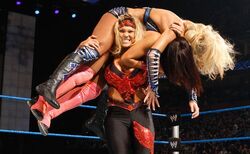 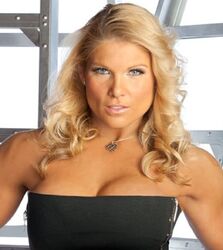 Add a photo to this gallery
Retrieved from "https://femalevillains.fandom.com/wiki/Beth_Phoenix_(WWE)?oldid=99894"
Community content is available under CC-BY-SA unless otherwise noted.