Start a Wiki
watch 01:48
The Loop (TV)
Do you like this video?
Beth Breen (Claudia Doumit) is the main villainess from "Ace Reporter," episode 2.18 of Supergirl (airdate April 24, 2017). She is the CFO of Spheerical Industries, and she was shown alongside CEO Jack Spheer at a press conference regarding Biomax, a nanobot system that was designed to eliminate all diseases.

It was revealed that Biomax had a flaw: it robbed users of their free will. Jack wanted to scrap the project, but Beth decided to go through with the project and use the flaw for her own evil purposes. With the use of a high tech earpiece and nanobots in Jack's system, the evil Beth controlled Jack and used him to kill those who could expose the flaw. Her first victim was former technician Joe Watkins, who revealed the flaw to Kara before the nanobots killed him in front of her. Beth also had Derrick Simmons killed while he was interviewed by Snapper Carr. Simmons signed up to participate in the company's human trials, but there weren't any.

Beth revealed herself as the villainous mastermind while Lena Luthor confronted Jack. Lena then realized that he wasn't knowingly responsible for the murders, and after the reveal, Beth boldly admitted everything. Her latest plan was to have Jack ingest nanobots into Lena, so Beth could control LCorp as well. After Supergirl arrived, the nanobots went after her, while Lena decked Beth, knocking the earpiece off her. Lena was able to override the nanobots, while also knocking out Beth once again. Jack died as a result, and Beth was later arrested. 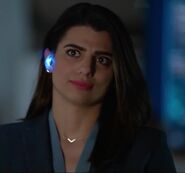 Beth's earpiece knocked off by Lena

Beth knocked out by Lena

Beth and her puppet
Add a photo to this gallery
Retrieved from "https://femalevillains.fandom.com/wiki/Beth_Breen_(Supergirl)?oldid=62844"
Community content is available under CC-BY-SA unless otherwise noted.