Beth (Hedley Harlan) was a villainess from the 2018 Lifetime film, Deadly Shores (airdate August 24, 2018). She was the mistress of Richard Palmer.

As indicated in the film, Beth's affair with Richard began during his marriage to his first wife, Grace, though the exact length that their relationship lasted was never revealed. Richard later murdered Grace in the beginning of the film, and it was early into the events of the film that Beth revealed herself as Richard's mistress, as they made out with each other while revealing their plans for Richard's second wife, Anna.

Beth returned to the home and posed as a woman working for Richard, only to later go over their plan to have Anna committed so they could live off her finances. While doing so, the evil Beth revealed herself as a blackmailer in the process, stating to Richard that she knew that he had murdered Grace and would go public with Richard's secret if he double-crossed her. The villainess had considered killing Anna, as she had the chance when Anna was on top of the tower, but she didn't do so only due to Richard telling her that they needed Anna to be alive and declared insane.

The film's climax saw Richard and Beth celebrating after the former locked Anna in a tower, as they believed that they were one step closer to obtaining Anna's money. However, Anna escaped with help from housekeeper Mrs. Argyle, and she later went on a psychotic murderous spree. After bludgeoning Richard to death with a candlestick holder, Anna chased Beth outside the house and killed the villainess using the same weapon. 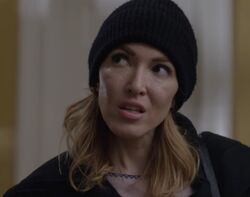 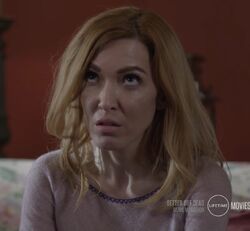 Add a photo to this gallery
Retrieved from "https://femalevillains.fandom.com/wiki/Beth_(Deadly_Shores)?oldid=113949"
Community content is available under CC-BY-SA unless otherwise noted.