The Female Villains Wiki
Register
Don't have an account?
Sign In
Advertisement
in: 1980s, Brunette, Fangs,
and 7 more

Berry Lou (Brinke Stevens) was a villainess from the 1989 horror-comedy, Transylvania Twist.

Berry Lou was an evil vampiress from a flashback scene with vampire hunter Victor Van Helsing. She is shown seated with Victor during a night out, and it is at that moment that she reveals herself as a vampiress and tells her true age:  1900. Just as Berry Lou is about to insert her vampire fangs into Victor, the hunter hands the villainess a vial, suggesting that they should have a drink together. Berry Lou drinks the contents of the vial, which is revealed to contain holy water, killing the vampiress instantly. 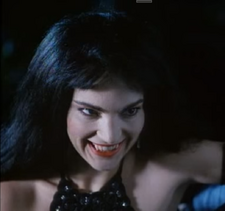 Berry Lou revealing herself as a vampiress