Start a Wiki
watch 01:50
The Loop (TV)
Do you like this video?
Bernadette Olsen (Denise Jones) is a minor antagonist in the 2015 family film "Russell Madness".

Bernadette Olsen is the local building inspector who arrives as the family wrestling business venue to inspect it for building codes violeations.  She informs Nate and Colleen that she needs to check various things to see if they can remain open.

She arrives unanounced late at night, wearing a blue business suit and knee length skirt.  She has her hair pulled back in a ponytail, and has coke bottle glasses.  She lets the owners know that she is sorry, but in addition to structural maintanence that is required, the electrical system is also faulty.  With this, she attempts to turn on the breaker, and is violently shocked and knocked to the ground.  When she regains conscious and stands up, her hair is fried and her face has been blackened.

Bernie as she likes to be called, quickly recovers and tells them they should have a look at the sprinkler system.  She attempts to use a lighter to start the sprinkler, but it doesn't work.  She tells them that the sytem is on the fritz.  She asks them to hand her a monkey wrench, which doesn't go well with Russell the monkey who is perched on Nate's shoulder.  Bernie opens up the valve and peers up through the opening located abover her head.  The audience hears rumbling, and all of the sudden, Bernadette is deposited with yellow gunk all over her head.  The liquid oozes all over her face.

Next Bernie takes out the fire extinguisher, which she notices expired in 1986.  Nate cautions her that she shouldn't monkey with it.  However, Bernie does not listen, and continues to attempt to use it, telling him that she is a professional.  All of the sudden, the extinguisher shoots out a white cloud of powder all over her face that clings to her sticky face.

Lastly we see Bernadette walking with the owners and tells them that the building is not up to fire code.  It will cost them a total of just over $64,000 for repairs.  Nate tells her that he doesn't have that type of money, and would need to hold about 50-60 matches to raise that much.  Bernie tells him that she can't allow any matches until the repairs have been satisfied.  With this, she walks out.

After making the changes to the problems, we see Bernadette return for inspections.  This time she takes extra precautions while checking out the problem areas.  When turning on the breaker box, she wears rubber gloves and the lights come on without incident.  When she checks the sprinkler system, she employs an umbrella.  Finally, when she shoots the new fire extinguisher she points it away from her and it harmlessly shoots like it should.  She reluctantly approves Nate and Colleen to be open for business. 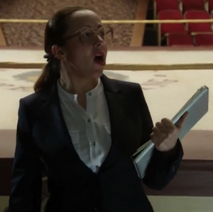 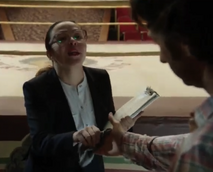 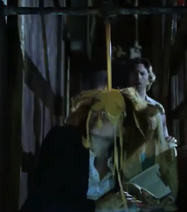 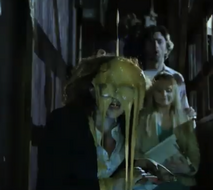 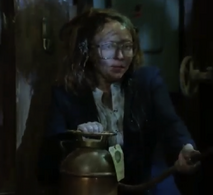 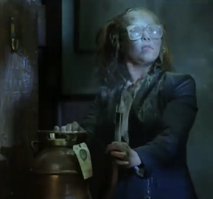 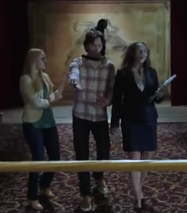 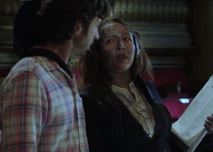 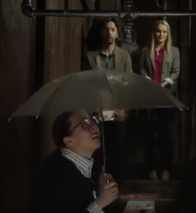 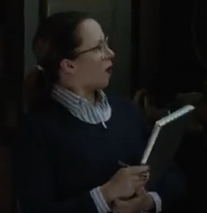 Add a photo to this gallery
Retrieved from "https://femalevillains.fandom.com/wiki/Bernadette_Olsen_(Russell_Madness)?oldid=149075"
Community content is available under CC-BY-SA unless otherwise noted.