Bernadette (Alyssa Lobit) is the main villainess of the 2012 horror film Among Friends. She was a psychiatrist and a friend of the main protagonists (Melanie, Sara, Adam, Jules, Marcus, and Blane).The movie began with Bernadette inviting the six friends to her house for a murder mystery party.

But during dinner, the party took a dark turn when everyone suddenly became numb from the waist down. But as the partygoers began to panic, Bernadette stood up, revealing that she had poisoned her guests and injecting Marcus with more of the paralyzing drug when he attempted to drag himself out.

Bernadette than duct taped her guests to their chairs and began to sadistically torment her friends, both physically and verbally. At one point, Bernadette put a plate of unidentified meat on the table, revealing soon after that that it was human meat from a man who "touched his little girl one too many times". When the limo driver that brought the protagonists to Bernadette's house came to return Jules' forgotten phone and heard her captives screaming for help, the evil Bernadette stabbed the man with a knife before slitting his throat.

Along with revealing that she had knocked out their friend Lily and placed her in the bathtub when she came to her for help getting an abortion, the psychotic Bernadette revealed that she had been spying on the six friends with cameras, using the footage to reveal their secrets. This included: Jules and Sara having a tryst while Marcus watched and masturbated, Blane and Melanie having sex (with Adam joining in) during a time when Blane was dating Sara, and Adam raping Lily. All the while, Bernadette tried to argue that she was in the right for exposing her friends' misdeeds.

In the film's climax, Lily woke up and barged into the dining room. Bernadette, who expressed disdain for Lily (in her mind) being weak following her rape, attacked her. But during the ensuing struggle, Lily managed to choke Bernadette unconscious before tying her up with duct tape. But when Lily learned that Jules (Adam's sister) had heard him raping her and done nothing to stop him, Lily left the six tied to their chairs. As they all began to scream to Lily to come back, Bernadette regained consciousness and gleamed evilly at her captives, most likely killing them all offscreen. A mid-credits scene then shows Bernadette at a bar receiving a call from her friend Amelie, expressing excitement for Bernadette's upcoming murder mystery party, hinting that Bernadette intends to continue her sadistic scheme with another group of friends. 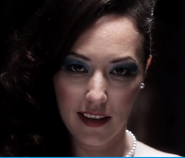 Bernadette's evil grin as she prepares to kill her captives
Add a photo to this gallery
Retrieved from "https://femalevillains.fandom.com/wiki/Bernadette_(Among_Friends)?oldid=122701"
Community content is available under CC-BY-SA unless otherwise noted.