Bend (Faith Salie) is one of the henchwoman in the 2001 episode "No Sweat" for the TV series, "Black Scorpion".

Bend is one of the two henchwoman along with Stretch (Ava Fabian). The two of them serve Aerobicide (Renee Allman), who is running a health spa. The health spa is attracting rich men and forcing them to exercise, while at the same time robbing them of their fortunes.

In the show, Bend and Stretch are repeatedly asked to attack Black Scorpion (Michelle Lintel). Each time, they are handily defeated. Finally, they are able to capture Scorpion and tie her up. Aerobicide asks Scorpion to come over to her side and join her. They leave Scorpion to think things over, despite Bend and Stretch's pleas to finish her off.

On the last encounter, Bend and Stretch ambush Scorpion in her own house. They use AR rifles to shoot the place up. Finally, Scorpion fires back at them with a laser gun. This knocks them out. After Scorpion then takes care of Aerobicide forcing her to exercise to death, we do not see the sidekicks anymore. It is unclear whether the shock killed them, or they were arrested. 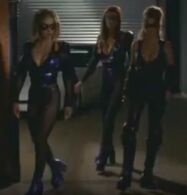 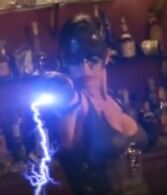 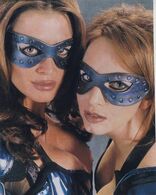 Add a photo to this gallery
Retrieved from "https://femalevillains.fandom.com/wiki/Bend_(Black_Scorpion)?oldid=159526"
Community content is available under CC-BY-SA unless otherwise noted.