Start a Wiki
watch 01:51
The Loop (TV)
Do you like this video?
Belle Carson (Sheila Campbell) is the hidden villainess of "Frontier Desperados", episode 1.13 of The Pinkertons (airdate February 28, 2015).

Belle Carson (nee Shirley) was the daughter of Judge John Shirley and the wife of cattle trader Wade Carson, with the episode's opening showing the two having come to Kansas City. As the two dined at the bar, Belle talked with Wade about a story she'd read in a magazine, with Wade's response indicating that he didn't approve of her free-thinking and opinionated nature.

Wade was later kidnapped outside the bar, with Belle appearing frantic and horrified at her husband's abduction. John came to Kansas City to comfort his daughter, hiring Pinkerton detectives William Pinkerton and Kate Warne to locate Wade. Belle later had the detectives tail her when she went to deliver the kidnappers' ransom demand, with the drop-off going awry and allowing the kidnappers to flee with the money.

Belle initially appeared distressed by her husband's situation; however, this was later revealed as a mask for Belle's true nature, as she was the mastermind behind Wade's kidnapping. As revealed over the course of the episode, Belle and Wade's marriage had been arranged by Belle's father as a means of saving his struggling business, with Belle secretly being immensely unhappy with Wade. Wanting to escape her marriage to Wade, Belle began an affair with Jesse James and enlisted him and his henchman to kidnap Wade, planning to make off with the ransom money. Unbeknownst to Belle, however, Wade had lost most of his hidden fortune in business deals.

Belle's villainous reveal began when Miyo informed William and Kate that Belle was having an affair, with the two following her to a hotel and learning that her illicit lover was the notorious Jesse James. Wanting to lure Belle into revealing herself as the orchestrator of Wade's capture, William and Kate claimed that Wade had been found beaten to death, causing Belle to go confront Jesse at the tent where he was holding Wade. Belle punched Jesse and chastised him for killing Wade, only to later tell Jesse that she hoped Wade revealed the whereabouts of the ransom money, establishing Belle's heel turn and reveal as the mastermind. After finding that Wade was still alive, Belle revealed how she had been set up by the Pinkertons and telling Jesse that he should've killed Kate when he attacked her after discovering she had followed him to their hotel tryst. The evil Belle then took Jesse's gun and confronted Wade, telling him that their marriage was simply manufactured by her father and promising to let him live if he told her where he had his money hidden.

As Belle prepared to kill Wade for refusing to tell her where the money was, William burst into the tent and shot Jesse, taking a bullet to his shoulder as he did. During the struggle between William and Jesse, Wade attempted to flee, only for Belle to follow him and hold him at gunpoint, telling Wade she wanted freedom when asked for a motivation for having him kidnapped and blasting Wade for (in her mind) trying to control her life. Wade eventually revealed that he'd hidden his money in their garden, as well as how he'd spent most of it and how it wouldn't last her more than six months. At the urging of Jesse (who was being held at gunpoint by William), Belle fled on her horse, ignoring Wade's pleads to come home. The episode ended with Belle smiling as she rode away on her horse, pleased with having finally escaped her arranged marriage to Wade. 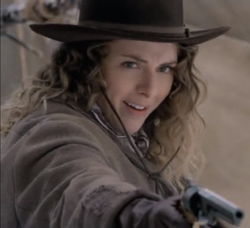 Belle holding Wade at gunpoint
Add a photo to this gallery
Retrieved from "https://femalevillains.fandom.com/wiki/Belle_Carson_(The_Pinkertons)?oldid=165211"
Community content is available under CC-BY-SA unless otherwise noted.