The music video features Belle and Priscilla at a bank posing as employees; though, in actuality, they were planning to rob the bank. The villainous blondes are shown in various montages playing poker and riding Indian motorcycles, and later breaking into the bank's safe deposit boxes and stealing a collection of jewels. Belle and Priscilla both donned ski masks and all black disguises during their heist, though they briefly removed them to admire their ill-gotten loot. The evil beauties escape right before bank later blows up, and the video with Belle and Priscilla fleeing in a luxury Bell Helicopter.

Belle Boyd in her disguise 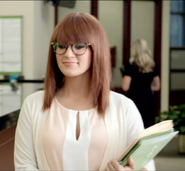 Priscilla Parker in her disguise

Retrieved from "https://femalevillains.fandom.com/wiki/Belle_Boyd_%26_Priscilla_Parker_(Somethin%27_Bad)?oldid=95268"
Community content is available under CC-BY-SA unless otherwise noted.