Start a Wiki
watch 01:48
The Loop (TV)
Do you like this video?
Belinda Zalman (Emily Swallow) is the main villainess from "Heart of the Matter," episode 3.04 of Beauty and the Beast (airdate July 2, 2015). She is the wife of billionaire philanthropist Marshall Zalman, who was dying of a heart condition and needed a transplant.

The Zalmans were confronted by Vincent Keller and Catherine Chandler--mainly the latter--following suspicion towards Marshall regarding superhuman experiments. Once Marshall is hospitalized, Belinda berated Vincent and threatened to sue the police department should Marshall pass on. Meanwhile, the heart that Marshall was supposed to receive was stolen, but the duo managed to capture the thief and regain Marshall's new heart, which was followed by curing it of any superhuman effects.

Belinda appeared to be grateful to Vincent and Catherine after Marshall's heart was returned, but a later scene revealed that her gratitude and concern for Marshall was a front for her true villainous demeanor. The scene showed Belinda berating one of her henchmen for his inability to keep the heart from being found, and she later vowed to keep Marshall from getting it. As it turned out, Belinda was angered over Marshall giving away his wealth to charity; feeling that she deserved it for (in her mind) giving up her entire life for him. She masterminded the plot to steal Marshall's heart so all of his wealth could go to her once he dies.

Vincent and Catherine (who were seeing a marriage counselor for their co-dependency) figured out Belinda's true role when the latter realized that certain things Belinda stated revealed her own co-dependency on Marshall. The duo figured that Belinda wasn't done with her villainous plot, and just as they figured, the evil Belinda set out on her backup plan: turning off the lights in the hospital to delay and even prevent the surgery. Catherine fought off the henchmen while the villainess made her escape; however, the final scenes showed Belinda in the station in handcuffs, as she was arrested while attempting to leave on her private jet. 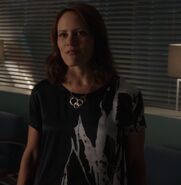 Belinda with her henchmen 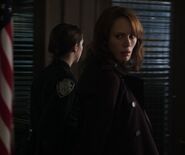 Belinda arrested and taken into custody
Add a photo to this gallery
Retrieved from "https://femalevillains.fandom.com/wiki/Belinda_Zalman_(Beauty_and_the_Beast)?oldid=97540"
Community content is available under CC-BY-SA unless otherwise noted.