For her entire life, Becky Sharpe has believed that the universe had been out to get her, as she had suffered mishaps at every turn. Three weeks prior to the events of the episode, Becky's bad luck was shown when her coffee order was mishandled; she ordered soy, but got milk in her coffee (she's lactose-intolerant). After this, Becky went home and found her boyfriend cheating on her with another woman, and she lost her job as a blackjack dealer after a minor mishap. She later went to her car and found a boot attached.

Becky was shown attempting to catch a bus, which she successfully does. During her bus ride, The flash entered through the portal, causing dark matter that spread around the bus and gave Becky (and others inside) meta-human powers. Becky's power caused her to have nothing but good luck, while also causing those around her to have bad luck.

In the events of the episode, Becky was shown exiting a limousine and entering a bank, which she robs without any effort due to her powers. While the security guard and everyone else was suffering mishaps, Becky simply walked into the vault and took an immense amount of money before walking out. Barry Allen (as The Flash) suffered from Becky's powers when his attempt to catch her was thwarted when he slipped on a collection of marbles. Due to Becky's powers, Cisco gave her the nickname, "Hazard," after various attempts.

Barry's attempt to get through to Hazard fell on deaf ears when he met the villainess at a coffee shop. Becky had stated that she had no idea how she got her powers, but despite this, she came across as having no problem using them to get whatever she wanted. She felt that it was time that everyone else suffered the misfortunes that she had to deal with her entire life, while also telling Barry that he couldn't stop her. In the episode's climax, Hazard returned to her former workplace and went on a huge winning streak, racking up $1.2 million. Her immense luck caused a number of catastrophes; including a plane about to go down, Joe's home falling apart, and the particle accelerator beginning to explode. Even so, Hazard continued not to show any concern or notice about the catastrophes and was headed to a slot machine in an attempt to win a $10 million jackpot. The Flash continued to suffer mishaps in his attempt to catch the supervillainess, but during Harry and Cisco's attempt to stop the accelerator from going off, the former decided to let it happen.

The particle accelerator's explosion caused Hazard's powers to shut down, just as she was closing in on winning the jackpot. The catastrophes were prevented, and The Flash finally caught up to Becky and arrested her. 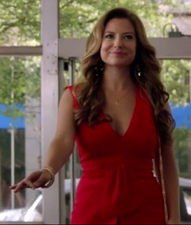 Add a photo to this gallery
Retrieved from "https://femalevillains.fandom.com/wiki/Becky_Sharpe_(The_Flash)?oldid=193095"
Community content is available under CC-BY-SA unless otherwise noted.