Start a Wiki
watch 01:51
The Loop (TV)
Do you like this video?
Becky Lynch is a professional wrestler currently competing in WWE, where she portrays a villainess.

Becky debuted for WWE's NXT in June 2014, but within months, she turned villainous after being pressured by Sasha Banks to make herself relevant. Becky's villainous turn came on October 23, when she appeared to save Bayley from being attacked by Sasha, only to attack Bayley from behind instead. After the attack, the evil Becky formed an alliance with Sasha, referring to themselves as Team B.A.E. (Best At Everything). Becky feuded with babyfaces Charlotte and Bayley for months, with Becky claiming that Bayley cost her the NXT Women's Championship on one occasion. Becky's alliance with Sasha ended in February 2015, after Sasha defeated Becky, Bayley, and Charlotte to capture the NXT Women's Championship.

Becky continued acting as a babyface entering her promotion to the main roster, which saw her, Charlotte, and Sasha Banks promoted as part of the Women's Revolution (formerly the Divas Revolution). She was later drafted to SmackDown during the return of the Brand Extension in July 2016, and it was at Backlash two months later that she defeated the rest of the SmackDown women to become the first ever SmackDown Women's Champion. Becky held the title until TLC, where she lost the championship to Alexa Bliss.

Becky received a shot at the SmackDown Women's Championship when she defeated champion Carmella in a non-title match on the July 24, 2018 edition of SmackDown. The match became a Triple Threat a week later when Charlotte defeated Carmella in the main event, and though Becky spent the weeks leading to their title contest at SummerSlam continuing her friendship with Charlotte, she began turning heel and harbored secret resentment over Charlotte being added to the match. At the event on August 19, Charlotte defeated Becky and Carmella to win the SmackDown Women's Championship, and after the match, Becky hugged Charlotte and appeared to congratulate her. However, Becky later assaulted Charlotte and walked out of the arena, turning Becky heel for the first time on the main roster.

Becky explained her villainous actions on SmackDown two nights later, stating that Charlotte stole her opportunity and even accusing the fans of never really being in her corner. The two women brawled again after her promo and on the following week as well, with Becky vowing to take back her title. On September 11, while Charlotte was bonding with fans after defeating Sonya Deville, the evil Becky appeared disguised as a fan and attacked Charlotte, after which she placed her former friend in the Dis-Arm-Her on the entrance ramp.

Becky captured the SmackDown Women's Championship from Charlotte at Hell In A Cell, and at Super Show-Down, she got herself intentionally disqualified in a rematch by striking Charlotte with her title belt. The women fought again in a Last Woman Standing match at Evolution, with Becky winning. Becky was set to face Raw Women's Champion Ronda Rousey at Survivor Series, but she was replaced by Charlotte after suffering a broken nose and concussion due to being punched by Nia Jax. Becky returned to action at TLC on December 16, where she lost the title to Asuka in a Triple Threat Women's Tables, Ladders, and Chairs Match that also included Charlotte.

Becky turning villainous and attacking Bayley from behind 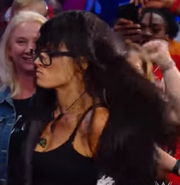 Becky in her villainous disguise on the September 11, 2018 edition of SmackDOwn
Add a photo to this gallery
Retrieved from "https://femalevillains.fandom.com/wiki/Becky_Lynch_(WWE)?oldid=136248"
Community content is available under CC-BY-SA unless otherwise noted.