The Female Villains Wiki
Register
Don't have an account?
Sign In
in: 2010s, Animal Murderer, Assassin,
and 25 more

Arrested
Becky Flynn (Susan Pourfar) is a recurring villainess from the second season of Scandal.

Becky was a CIA operative as well as an assassin-for-hire, and as revealed in episode 2.12, "Truth or Consequences," Becky was hired by Hollis Doyle to kill Jesse Tyler, a Cytron employee who was paid by Hollis to rig the voting machines in Defiance, Ohio; leading to Fitz Grant being elected President. The murder-for-hire was due to Jesse demanding more money from Hollis, and under Hollis' order, Becky planted a bomb in the Cytron building, which killed Jesse and four other employees. She framed Lindsay Dwyer (a Cytron employee and Jesse's girlfriend) for the bombing by placing Lindsay's name and address on the package with the bomb.

As a result of Becky's villainous actions, Lindsay was not only set up for the bombing, but she was scapegoated as a conspirator in the Defiance Conspiracy. Olivia Pope and her crew took Lindsay and gave her a new identity--Quinn Perkins--while also hiring her as a member of Olivia Pope & Associates.

Becky first appeared in episode 2.04, "Beltway Unbuckled," in an AA meeting attended by Huck. She introduced herself to Huck as a cocaine addict, with Huck claiming that his addiction was alcohol; after which a sexual relationship blossomed. However, Becky's relationship with Huck was part of her mission to set him up, as she had actually spotted Huck saving Lindsay/Quinn after the bombing.

Later on, Becky was hired and paid by the evil Verna Thornton to assassinate Fitz, doing so to cover up Verna's role in the Defiance Conspiracy. The villainess committed the attempt in episode 2.08, "Happy Birthday, Mr. President," using a remote controlled rifle to fire the shots during Fitz's 50th birthday celebration. Fitz was shot in the head, but survived, while Press Secretary Britta Kagen was shot and killed. Becky framed Huck for the shooting, as Huck appearing in the room with the rifle was part of her plan.

Becky's reveal as a villainess came in the following episode, "Blown Away," when video of her heading to the hotel alone was unveiled by OPA, much to Huck's shock. Later in the episode, Becky appeared to Huck in his car and held him at gunpoint, cementing her reveal, while also boasting about how she used Huck and played him. She coerced Huck to run away with her, and though Huck appeared to acquiesce, he actually phoned Harrison Wright regarding his and Becky's whereabouts. After learning about the call, the evil Becky entered the home of a family that Huck had been watching for a while (including during Becky's reveal) and killed all of them, including their young daughter and even their family dog, doing so in an act of cruel revenge towards Huck.

After Huck was cleared in the assassination attempt, he learned that Fitz was still alive and warned OPA that Becky would make another attempt, which she did in the following episode, "One For the Dog." She was shown aiming her sniper rifle when she was caught and held at gunpoint by Huck, which was followed by Becky's capture and eventual arrest. In the aforementioned "Truth or Consequences," Becky handed Huck her bank account information after Huck revealed his real name, which ended up revealing Verna as the villainous mastermind behind the assassination attempt. 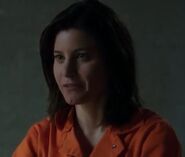 Becky in prison
Community content is available under CC-BY-SA unless otherwise noted.