Becky (Jill Alanna Nixon) is the titular villainess of the short horror film Becky, released by Renderyard (release date April 23, 2016). She was a young woman shown in the film's beginning going on a date with Steven, who she met on an online dating app.

The date went well, with both Becky and Steven seemingly being charmed by the other. Steven briefly went to the bathroom during the date, during which time he swiped a few other women on the dating app before being called for by Becky. When Steven left the bathroom, he found the black dress Becky was wearing on his bed and began to undress, believing this meant Becky was preparing to have sex with him.

But at that moment, Becky turned heel by sneaking up on Steven and injecting him with a needle, with the chemical causing Steven to become paralyzed. Later on, Becky (having now donned a white shirt) laid the helpless Steven out on a black tarp as she held a knife in her hands. When Steven yelled at Becky that he'd done nothing to her and that she was crazy, the evil Becky replied that Steven was the crazy one for inviting a stranger into his house on the chance that they would have sex before killing her victim, stabbing Steven to death and sadistically laughing as she did so. The film ended with Becky wiping the blood from her cheek and swiping a few men on the dating app before leaving Steven's apartment, suggesting that Becky was a serial killer who intended to continue her murder spree. 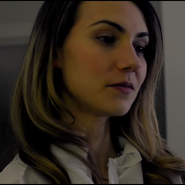 Becky's villainous reveal
Add a photo to this gallery

Retrieved from "https://femalevillains.fandom.com/wiki/Becky_(Becky)?oldid=194219"
Community content is available under CC-BY-SA unless otherwise noted.