Beatrice is the hidden villainess of In The Wake of the Werewolf, a story from Forbidden Worlds #17 (released in May 1953). She was a young woman who lived in a desolate house with elderly couple Frank and Minnie. In the comic's beginning, professional thief Larry Coe was in the midst of robbing the house when he overheard a commotion between Beatrice and her landlords.

As Larry attempted to flee the house, Beatrice rushed over to him and begged him to help her, proclaiming that Frank and Minnie were "stark mad" and were trying to kill her. Frank and Minnie (who were armed respectively with an ax and wooden stake) proclaimed that Beatrice was a vampire, an accusation that Beatrice strenuously denied. Larry, having been instantly taken by Beatrice's beauty, fought off Frank and Minnie and fled with Beatrice to her bedroom, which was equipped with a heavy steel door. 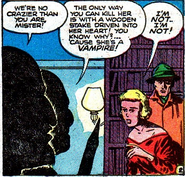 Beatrice being accused of being a vampire

Beatrice's reveal as a villainous werewolf
Add a photo to this gallery
Retrieved from "https://femalevillains.fandom.com/wiki/Beatrice_(In_The_Wake_of_the_Werewolf)?oldid=83834"
Community content is available under CC-BY-SA unless otherwise noted.