Start a Wiki
watch 01:51
The Loop (TV)
Do you like this video?
Baroness Sophia (Emma Louise Saunders) is one of the main antagonists in the 2017 film ‘A Christmas Prince’.

Baroness Sophia is a selfish, stuck-up Gold-digger and the former flame of Prince Richard. Before the events of the film, Sophia seduced Richard and then informed the press of their exploits, seeking to gain wealth and fame.

Sophia first appears when she is invited to stay at the Beldovian castle over Christmas. She enters the room and is quickly met by Simon, Richard’s conniving cousin, who has unrequited affection for her. Sophia brushes him off and makes a comment to him about Amber, the protagonist’s, choice of footwear. Amber is pretending to be a tutor for the Princess so she can make it as a reporter in time for Richard’s coronation. Sophia then seductively hands Richard a bauble and walks off.

Later, Sophia appears whilst Richard is practicing the piano. Sophia attempts to rekindle their relationship so she can be coronated queen, but Richard knows how selfish and wicked she truly is, so he rebuffs her advances. The scheming villainess attempts to make him believe she has changed and it was just a silly mistake, but Richard doesn’t believe it.

Sophia is later seen in a carriage along with Simon complaining about the weather when she spots Richard, Amber and Princess Emily having a snowball fight; Sophia is jealous as she wants to marry Richard to gain power. She and Simon presumably inform the Queen what is happening, as Princess Emily is very ill, but the Queen is not angry.

At night, Sophia spots Richard and Amber making their way back from the forest, where Richard rescued Amber from a wolf. She is jealous and angry, and shuts the curtains in a huff.

In the day, Sophia makes her way over to Richard once again attempting to make him fall in love with her. She kisses him, which Amber sees. This causes Amber to believe that Sophia and Richard have a secret relationship. However, Richard pushes her off him; Sophia angrily tells him that he won’t be able to rule without her and leaves the room.

Sophia has realised that something is off about Amber so she and Simon break into her room. In there, Sophia discovers Amber’s true identity and Simon finds Richard’s adoption papers: Richard was adopted! Sophia then switches her affections to Simon, as he is next in line.

She is next seen at the royal ball, where at the end Richard will be coronated king. The beautiful villainess is seen wearing a low-cut, tight red gown that showcases her beauty magnificently. When Amber appears, looking lovely in a beautiful blue dress, Sophia rudely remarks to Simon that it is ‘like lipstick on a pig’.

Sophia is seen later, signing the marriage papers with Simon. At The coronation of Simon, Sophia smirks next to him, proud that her plan is about to succeed. However, Amber has managed to find the deceased king’s will, stating that, although Richard isn’t his literal son, he is his son in his heart, so he should be king. The King’s will surpasses all other laws, and despite Sophia’s protests, Richard Is crowned King. Sophia is last seen telling Simon that she wants a divorce and storms out the room, with Simon following her.

In the second film, Simon is impoverished due to his divorce with the unseen Sophia. 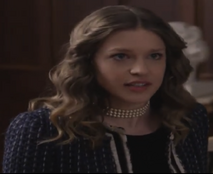 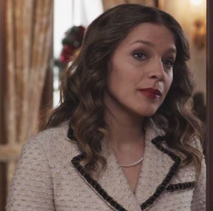 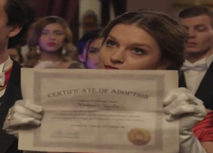 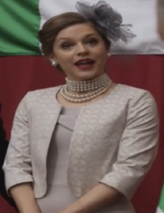 Add a photo to this gallery
Retrieved from "https://femalevillains.fandom.com/wiki/Baroness_Sophia_(A_Christmas_Prince)?oldid=185647"
Community content is available under CC-BY-SA unless otherwise noted.