Start a Wiki
watch 01:50
The Loop (TV)
Do you like this video?
Baroness Katrin Frankentein (Monique van Vooren) is an antagonist in the 1973 horror film "Flesh for Frankenstein".

Baron Frankenstein (Udo Kier) is a neurotic aristocrat married to Katrin, his sister, whom he had two children with, Marika and Erik.  It is a marriage of interest, and the Baroness has an unsatisfied sexual appetitie.

The Baron creates a perfect female zombie, a murdered prostitute (Dalila Di Lezzaro) from a local whorehouse, and does the same with a male one named Sacha (Srdjan Zelenovic).  His plan is to mate them in order to create a master race.

The promiscuous Baroness summons Nicholas, a local peasant, and makes out with him.  Nicholas was friends with Sacha, whom the Baron used for his monster.

When Frankenstein presents his creations, Nicholas recognizes the face of Sacha on a foreign body.  After asking Katrin about her husbands experiments, she explains that she does not know anything about them since she is forbidden.

Nicholas penetrates the secret lab and discovers the butchery where human organs are all over the place.

Nicholas in the meantime, attempted to leave the castle with Sacha, and is captured and linched.

The monster, badly interested in sex, squeezes the Baroness until she is killed.  The Baron then orders the male monster to find Nicholas and kill him.  However, he instead turns on the Baron and kills him before committing suicide.  The film ends, with indications that the Frankenstine children plan to continue the work of their father. 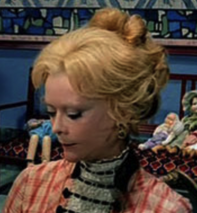 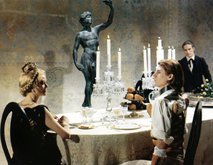 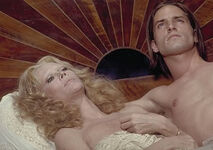 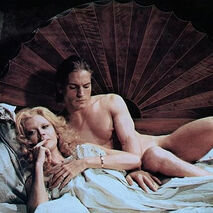 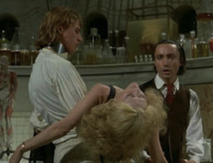 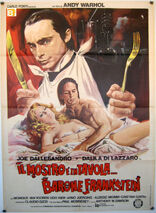 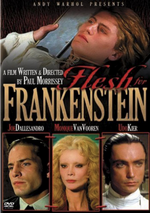 Add a photo to this gallery
Retrieved from "https://femalevillains.fandom.com/wiki/Baroness_Katrin_Frankenstein_(Flesh_for_Frankenstein)?oldid=208558"
Community content is available under CC-BY-SA unless otherwise noted.