Start a Wiki
watch 01:51
The Loop (TV)
Do you like this video?
Baroness (Allison Scagliotti) is the hidden villainess of Truly Outrageous, a fan film inspired by the 80's cartoon Jem (release date May 30, 2018).

She was initially introduced into the film as a news reporter covering a USO charity performance the band Jem and the Holograms were holding for their girls' foster home.

However, the interview quickly took a turn when the reporter brought up how Kimber was the daughter of inventor Emmett Benton, who was believed to have been killed in a plane crash three years prior to the film's events, with the reporter callously condemning Kimber for performing in the band while her father's death was still unsolved. The reporter's callous words to Kimber ultimately served as foreshadowing to her true nature as a villainess.

Baroness reappeared after Kimber was kidnapped by Eric Raymond and his conspirator, Russian communist Kevin, as part of their plan to retrieve the Synergy technology invented by Emmett and used by Kimber's sister Jerrica to pull off her "Jem" persona for the band. Baroness arrived as Kevin tried to interrogate Kimber about Synergy, with Kimber recognizing her as the reporter. After Baroness taunted Kimber about her father's death and suggested that she was responsible for the plane crash, the villainess had her henchmen take Eric (who had no idea about Baroness' involvement in his and Kevin's plans) away. Baroness then praised Emmett's inventions before revealing a secret to Kimber: she was actually a robot created by Emmett, as he made her when her mother Jacqui became gravely sick to serve as someone to protect Jerrica after their mother died. This reveal also suggested that Baroness intended to use Kimber for her own technological ambitions.

Soon afterwards, Jerrica and their bandmates (Shana and Aja) arrived with their rival band The Misfits, with Stormer (Kimber's girlfriend) being the only one to stay to help Jerrica save Kimber. After stopping Jerrica and her friends from performing a song due to not having copyright, the evil Baroness pulled out a pistol in an attempt to scare the trio away, only to be shoved from behind by the returning Misfits. As Baroness attempted to retrieve her gun, several hologram soldiers entered the building, with Baroness quickly realizing they were holograms and ordering her men to attack them. But at that, Riot (a soldier and friend of Jerrica's) revealed he was real, with Baroness realizing the same after feeling him. Knowing she was defeated, Baroness ordered her men to retreat, fleeing with them after telling Kimber to find her when she was "ready".

Baroness posing as a reporter 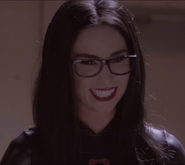 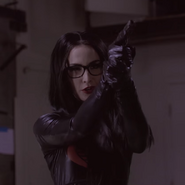 Baroness armed with a pistol

Retrieved from "https://femalevillains.fandom.com/wiki/Baroness_(Truly_Outrageous)?oldid=202642"
Community content is available under CC-BY-SA unless otherwise noted.