The Female Villains Wiki
Register
Don't have an account?
Sign In
Advertisement
in: 1990s, Betrayer, Brunette,
and 21 more

The plot involves a bunch of criminals who failed a criminal organization being dumped in an abandoned prison and told to kill each other until the few survivors get the right to leave with their lives.

Barbie is a relatively harmless woman who knows she's sexy, and she knows all the men around her are too stupid to do the smart thing and just shoot her, so she distracts/teases them with her sexiness and turns manipulative. She will say and do anything to please the men around her. And then she'll stab them in the back or escape the first chance she gets.

After she betrays one of the gangsters that protected her by killing him while he lies there wounded after a shootout, Barbie goes to grab the breifcase thats presumed to be the cash money everyones been fighting for. As she turns the corners its revealed to be a dud and blows up on her. She comes walking back dazed with her hair lit and face blackened as she screams and panics, putting her head through a locker to put the fire out and getting stuck in the process. Her unconscious body is seen while Lou walks bye. However, Barbie is presumably killed as she is not a part of the final 3 survivors that are supposed to kill eachother. 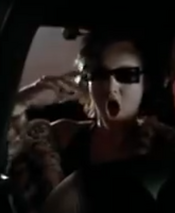 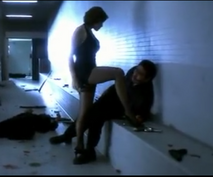