SeductionCriminal Ties to many important people

Kidnap men and Shanghai them

Arrested, possible that Jarrod May become her lawyer

Barbara ‘Barbary’ Red (Jill St John) is one of the main antagonists in the 1966 episode ‘Barbary Red’ for the TV series ‘The Big Valley’.

Barbara "Barbary" Red is a very sexy saloon girl and a ‘Crimp’ who kidnaps men and sends them overseas for forced work. It seems nearer the end that she will reform but thankfully she changes once again near the end.

Barbary was formerly also a crimp, working with her boyfriend Jack. However, she was arrested and became a client for Jarrod Barkley. Unluckily for her, she was found guilty and sentenced to six months imprisonment. Now free, she owns a saloon where she and her men along with evil prostitutes (Saloon Girls), notably Dolly (Donna Michelle) drug men and kidnap them.

She is first seen when Nick Barkley and his friends go to their saloon. After Nick is approached by Dolly, he asks her is she is the famous Barbary Red. Barbary replies that she is. Because it’s NIck’s birthday, they take him to a private room where they drug him. Before nick collapses into unconsciousness she tauntingly and seductively asks ‘Why Fight it?’ She takes him outside with her men and boards him on a temporary boat in the river.

Later, Jarrod goes to the saloon to find out where Nick is. He already suspects Barbary of being a crimp, so he decides to seduce her. He tells her he wants to get to know her as man and woman, not client and Lawyer. She accepts, but on three conditions: 1. Not to bring up the case at all, 2. She gets to choose where the date is (she chooses Barkley manor and 3. She has to be cordially invited by Victoria Barkley.

Later, Jarrod goes over to the saloon and Barbary, wearing spectacles and talking about ’business’, stops when he arrives. She takes off her glasses and is delighted when he asks her there.

Barbary is later seen wearing sexy lingerie trying on a ‘posh’ dress. However, she is surprised when she finds her boyfriend Jack in the bathtub! She tells him she is trying to spread out in society and to make some friends in the right places. He then unboxes a box with fur in for her; she runs off crying because she loves Jack and Jarrod.

When Barbary arrives she immediately turns her carriage and goes away because she feels nervous. Jarrod comes to see her at her house and she decides to have a night out with him (although not at Barkley manor). At the restaurant, Shen is annoyed when he tries to get her to confess that she is part of the business.

Later Nick comes to see her and he tries to get her to change her ways and becomes a member of society. They passionately kiss and hold hands. Suddenly, Jack comes in! When Jarrod leaves, Barbary pretends that she is only using him.

Later, Heath Barkley goes into the saloon so he could get shanghaied. When she is notified By Dolly, Barbary recognises him and half-heartedly attempts to ward him off. However, she sees that it is no use and allows Dolly and the Barman to drug him and take him unconscious.

Later, Barbary and Jack drive off, spied on by Jarrod. When Jack is talking, Barbary attempts to flee, saying that she is done with this life. Jack has her guarded in the carriage.

However, when she sees that Jarrod was only using her for information, she immediately reverts back to her old self and attacks him. They fall out the carriage and Barbary is temporarily subdued on the floor. When Jack is shot, Barbary runs crying over to him and laments over how Jarrod used her. They leave her crying over her lover’s corpse.

It is later revealed that Barbary is in custody and Jarrod is going to try to be her lawyer. 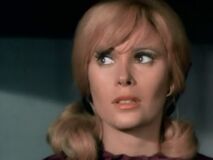 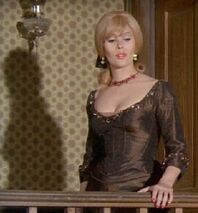 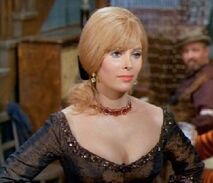 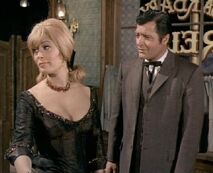 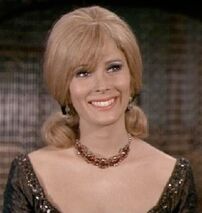 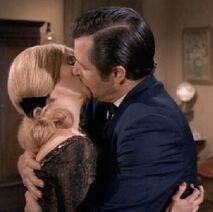 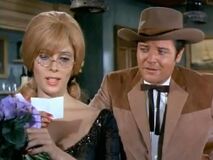 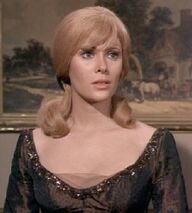 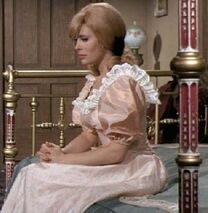 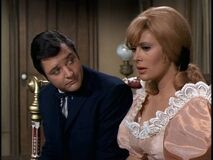 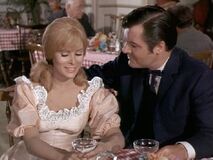 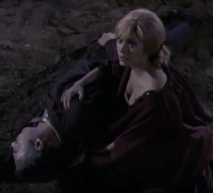 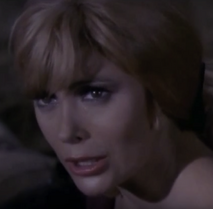 Add a photo to this gallery
Retrieved from "https://femalevillains.fandom.com/wiki/Barbary_Red_(The_Big_Valley)?oldid=181082"
Community content is available under CC-BY-SA unless otherwise noted.