Start a Wiki
watch 01:48
The Loop (TV)
Do you like this video?
Barbara Simone is the main villainess from "The Return of Commander Cool," the second episode of A Pup Named Scooby-Doo's second season (airdate September 16, 1989). She was the secretary for Carol Colossal, the owner of Colossal Toys.

However, Barbara had been stealing blueprints for Colossal's toys, and was planning to sell them to make a fortune. To keep others from finding out about her sinister scheme, Barbara disguised herself as a one-eyed alien to scare others away. The Scooby-Doo Detective Agency was on the case due to their encounter with the alien in the beginning of the episode, which resulted in Shaggy bumping his head and believing that he was superhero Commander Cool (due to him wearing the costume and Scooby being dressed as Mellow Mutt). In every encounter with the alien, Barbara often appeared and gave directions to the gang's destinations during their search for suspects.

Barbara's defeat came when Scooby toppled over a stack of boxes, which fell on top of the alien. Velma later unmasked Barbara, who stated that her plan was efficient and was wondering how she failed. Barbara's tube of lipstick found at a scene and the blueprints being found were key clues, but what really gave Barbara away as the culprit her notepad, which said (in secretary shorthand) that the blueprints were for a toy space base. Part of Barbara's scheme also involved the use of movies to create the illusion of a flying saucer, and following her reveal, Barbara was arrested and taken away by police. 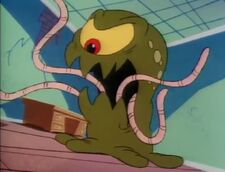 Barbara in her alien disguise 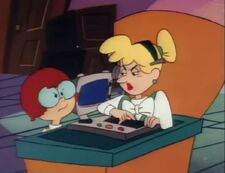 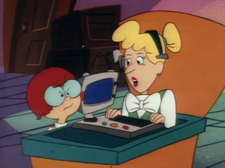 Barbara Simone unmasked
Add a photo to this gallery
Retrieved from "https://femalevillains.fandom.com/wiki/Barbara_Simone_(A_Pup_Named_Scooby-Doo)?oldid=183131"
Community content is available under CC-BY-SA unless otherwise noted.