Start a Wiki
watch 01:38
The Loop (TV)
Do you like this video?
Barbara Collins was a villainess from "Blood Drops," episode 1.07 of CSI (airdate November 17, 2000). She was the wife of Scott Collins and the mother of their children:  Steven, Brad, and Tina.

Barbara was found dead in her bed as part of a mass murder, as her husband and sons were killed as well. Tina and her younger sister, Brenda, were introduced as the sole survivors, but the investigation's progression revealed that the murders were committed by Jesse Overton, Tina's boyfriend. In addition, it was revealed that the murders were masterminded by Tina herself, with her motive for Scott's murder being that he was set on molesting Brenda. In a more shocking reveal, Tina added that Barbara and her brothers were killed because they didn't protect her from being molested by Scott, posthumously revealing Barbara as a callous villainess.

Tina had been raped by Scott since she was six years of age, but instead of coming to Tina's aid and saving her from Scott, Barbara turned heel and covered up for her fiendish husband, with Tina's brothers doing the same. As a flashback showed, the evil Barbara closed the door of young Tina's room, knowing that Scott was inside and about to assault her. The assaults resulted in Tina becoming pregnant with Brenda at age 13, with Barbara turning a blind eye to the pregnancy and not noticing that Tina's clothes were becoming bigger. Both of Tina's parents and her brothers were all stabbed to death by Jesse, with Barbara's murder coming while the villainess was asleep in her bed. 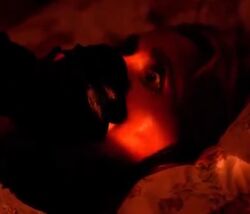 Barbara's last moments before her murder

Barbara's deceased body
Add a photo to this gallery
Retrieved from "https://femalevillains.fandom.com/wiki/Barbara_Collins_(CSI)?oldid=185029"
Community content is available under CC-BY-SA unless otherwise noted.