Barbara Cleveland (Maurine Dawson) is a spy in the 1968 episode "Closely Watched Planes" for the TV series "Get Smart".

Barbara is KAOS agent posing as a stewardess on a passenger plane from which five CONTROL agent couriers have gone missing from in mid-flight. Maxwell Smart (Don Adams) was assigned to watch the latest courier agent, Busby (Ward Wood) on a previous flight, when he disappeared after using the restroom.

The Chief (Edward Platt) assigned Max to pose as a courier on the next flight, with an empty attache case attached to him. When Barbara asks him if he would like another coffee, Max starts up a conversation with her. He asks if they have met before, but she says she doesn't think so. Max responds, that he never forgets a face. He is actually correct, since she was the stewardess on the earlier flight, but she was wearing a blonde wig, and now is a brunette.

One of the other passengers on the plane, Tolliver (Ivan Bonar) who is a parachute salesman and double agent, tries to warn Max who the killer is, but before he can tell him, he is poisoned. Agent 99 (Barbara Feldon) is also posing as a stewardess on the plane, and together they put Tolliver's body in the restroom for safe keeping. However, when they go to check on him later he is missing. Max remembers, that Barbara was actually the same stewardess on the earlier flight, and asks 99 to call the Chief to see if he can check on that for them. Because of the 12 cups of coffee that Barbara has force fed to Max, he has to use the restroom. While he is in there, 99 is on the phone talking to the Chief, when Barbara comes in pointing a gun at her. She then calls the pilot and co-pilot in the cockpit and tells them that Max is in the restroom. With that, they push a button that opens the trap-door of the restroom. However, Max has somehow avoided falling through and makes his way out. He then comes upon Barbara still pointing a gun on Agent 99. She takes Max's gun and is now pointing guns at both 99 and Max.

Max is able to distract Barbara with the fake gun she is holding that he got from a magician on the flight. The gun shoots water instead of bullets, and when it goes off, 99 is able to wrestle Barbara out of her gun and gain control. They then determine that she is working with the pilot and co-pilot. Max goes into the cockpit and knocks out both men. He announces to the rest of the passengers that everything is under control, they will be landing in Miami in less than 30 minutes. Then he adds, does anyone know how to land a four-engine jet? This is the end of the episode. 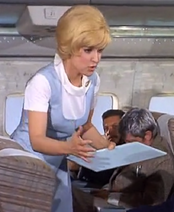 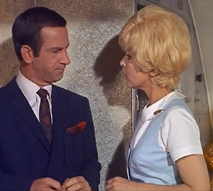 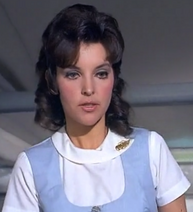 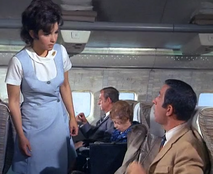 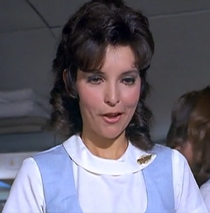 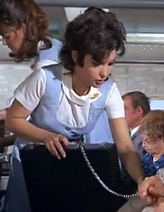 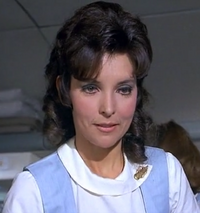 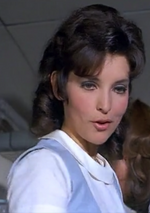 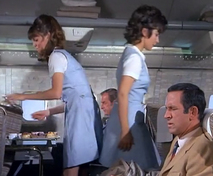 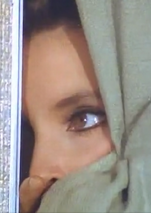 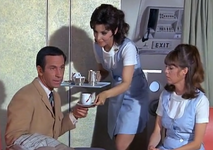 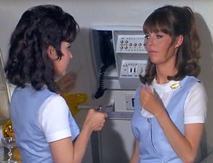 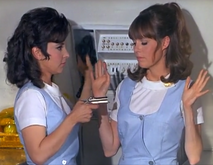 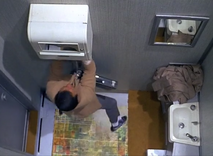 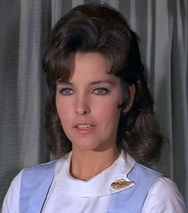 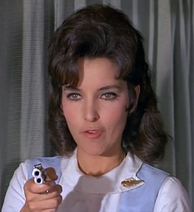 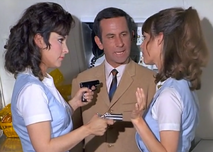 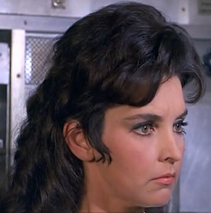 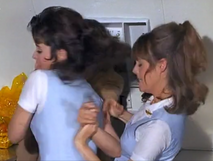 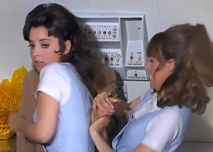 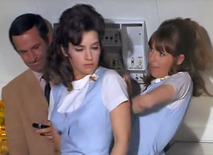 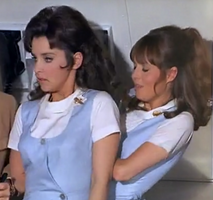 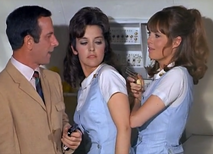 Add a photo to this gallery
Retrieved from "https://femalevillains.fandom.com/wiki/Barbara_Cleveland_(Get_Smart)?oldid=83261"
Community content is available under CC-BY-SA unless otherwise noted.