Start a Wiki
Barbara (Barbara Gordon) Is the main villainess from the 2018 Lifetime film, My Husband's Secret Life (alternately titled, Sleeper; airdate March 25, 2018). She was introduced as the mother of Freddy Jones and the mother-in-law of Freddy's wife, Jennifer Jones (the film's main protagonist).

Barbara first appeared after Freddy was hospitalized due to being run over by Arthur Stern, and she displayed a genial demeanor towards both Jennifer and her best friend, Connie, afterwards. However, Barbara is revealed as a Russian spy, as was Freddy--whose real name was Sacha Volkov. In addition, Barbara was not Freddy's mother, she was his handler, and her reveal came as she was meeting with Anna regarding Stern, with Anna killing Stern at his home under Barbara's orders. After Jennifer and Freddy escaped Anna's pursuit at the hospital, they ended up encountered by Barbara, who held them at gunpoint at their home.

Barbara revealed herself as Freddy/Sacha's handler, while arrogantly boasting about how Jennifer had been lied to by her husband. Her attempts to get Freddy to leave with her and head to Moscow, however, were met with resistance from Freddy, as he stated that he had spent 15 years in America and refused to leave Jennifer, while referring to himself as an American. In response, the evil Barbara insulted Freddy's newfound nation and stated that they could return to Russia as heroes, only for Freddy to tie up Barbara so he could meet Jennifer.

Barbara escaped with Anna's help, and she appeared at the home and held the couple at gunpoint, doing so while Jennifer was threatening to shoot Freddy, which she does. The shooting was actually a ruse, as Freddy was wearing a protective vest given to him by Connie (who revealed herself as an FBI agent) and afterwards, police arrived and arrested Barbara and Anna, with both women being sent back to Russia. 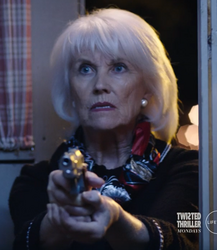 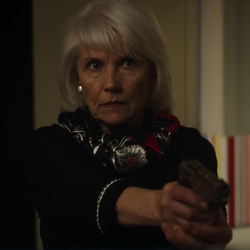 Add a photo to this gallery
Retrieved from "https://femalevillains.fandom.com/wiki/Barbara_(My_Husband%27s_Secret_Life)?oldid=157735"
Community content is available under CC-BY-SA unless otherwise noted.