Start a Wiki
watch 01:48
The Loop (TV)
Do you like this video?
Bambi is a villainess from the cartoon Police Academy: The Animated Series. She appears in the 1988 episode The Hang Ten Gang.

She is the only female member of the villainous Hang Ten Gang, a group of hoverboard riding burglars. The evil Bambi dresses in a green swimsuit with a pink shirt over the top. She also wears sunglasses on her head and purple high heel pumps on her feet.

Bambi and the gang are first seen robbing money from an armoured truck, they shoot some kind of oil at the truck windows, which causes it to crash. The gang then steal the loot inside and make a getaway on their hoverboards. However, the police are in pursuit and chase them through a shopping area and on to the roof of a car park. Bambi shoots oil at the window of the police car which causes it to crash into another set of officers on a motorbike, and knock them off the roof and into a fountain below. The gang then make their escape.

Later on, two police officers report in from their vehicle that they suspect the gang are at the Marina View Hotel. But the gang sneak up on the police, and one throws a gas ball inside of their vehicle, which causes the officers inside to start coughing. The entire gang then try to kill the police by pushing their car off a cliff and into the sea below, but the officers manage to escape before the car fully sinks into the deep water.

Having believed they’ve dealt with the police for good, the gang return to the hotel and steal a safe from the manager’s office. The male members are dressed as maintenance men and Bambi now wears a flowery pink dress. The gang try to make a quiet exit with the safe, but the police stop them and ask if they have seen any suspicious surfer types around. Their identity soon gets revealed when the door hiding the safe and Bambi accidentally opens. The manager points out the safe and the police have the gang at gunpoint, with their hands in the air ready to surrender. But just as it looks like the evil crooks are going to be arrested, a bumbling effort at saving the day from other police officers causes the glass on a tank to break, and the hotel gets flooded with water. The gang use this as an opportunity to escape and bind and kidnap the hotel manager, taking her with them.

Back at their cave hideout, the gang think they have gotten away with their crimes, but the police track them down and they have to flee once again. Bambi hovers above the police and drops some exploding seashells on them, but the officers manage to avoid any damage being dealt to them. All of the gang are eventually dealt with, with Bambi’s defeat coming when an officer on a glider flies above her and drops live bait all over her. This causes the evil Bambi to fall off her hoverboard and she lands on the beach below in a humiliating fashion, with live bait all over her. She is next seen tied up by rope with the rest of the gang, and is arrested for her crimes. 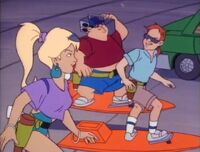 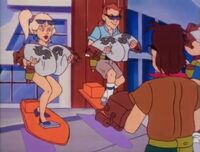 Stealing bags of money from a truck 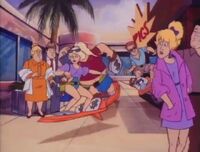 Escaping through to the shops... 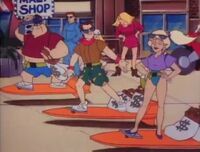 ...where Bambi wants to shop until she drops 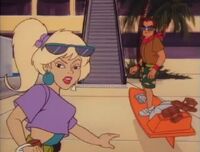 Noticing the police on their trail... 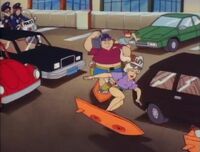 ...they escape on to the roof of a car park 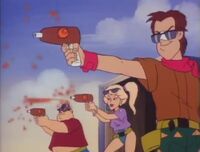 Bambi fires oil at the police car and sends them crashing 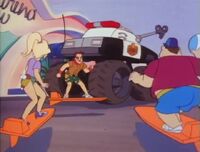 Sneaking up on the police and dropping a gas ball inside their car... 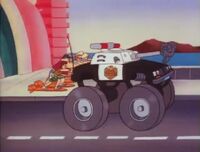 ...before trying to kill them by pushing the car... 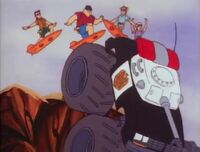 ...off a cliff and into the sea below 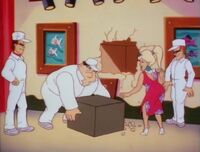 The gang steal a safe from the hotel manager's office 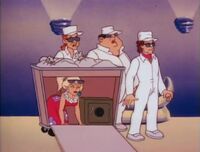 But their plan to escape undetected is blown... 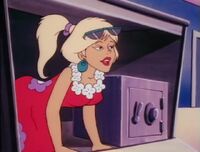 ...when the door hiding Bambi and the safe opens 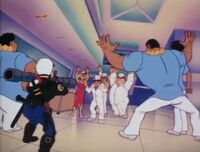 The gang surrender to the police... 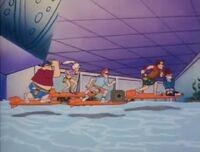 ...but a blunder allows them to escape with the safe and a captive 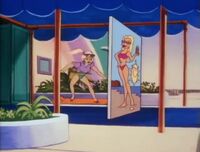 Bambi escaping the hotel on her hoverboard 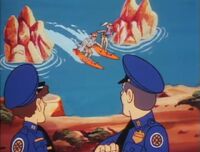 The gang flee from their cave when the police show up... 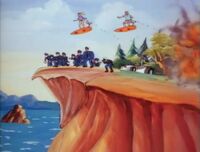 ...but not before they attack from above with explosive shells 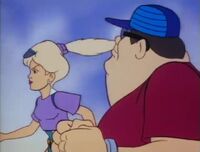 Bambi and a fellow gang member

Bambi is defeated when an officer drops live bait on top of her... 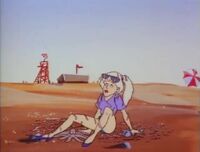 ...and knocks the villainess off her board and to the beach below 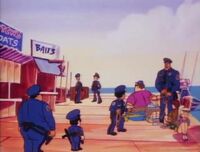 Bambi is tied up by rope to her other gang members... 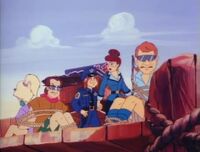 ...and arrested for her crimes
Add a photo to this gallery
Retrieved from "https://femalevillains.fandom.com/wiki/Bambi_(Police_Academy:_The_Animated_Series)?oldid=206096"
Community content is available under CC-BY-SA unless otherwise noted.