Baby Doll and Arlene Doll (Cathy Worthington and Mindi Miller) is the henchwomen of Mr. Mephisto for the 1976 episode "Mr. Mephisto" for the TV series Monster Squad.

The city's mayor Goldwyn (Edward Andrews) is replaced with a lifelike doll by the nasty Mr. Mephisto (Barry Dennen), who increases taxes in the city.  This nearly shuts down practically every local business, and Mr. Mephisto lines his own paockets with all the money.

Mr. Mephisto is using hypnosis along with the ability to bend anyone to his diabolical will.  He uses a device called a "magical-type-a-tongue" which allows him to put words in the mouths of his victims.

The Monster Squad figures out what Mr. Mephisto is doing, and tries to shut him down.  After finding Mr. Mephisto's hide-out at the Doll Factory on Broad Street, they send Dracula and Frankenstein to bring the villain into custody.  Unfortunately, Mr. Mephisto hypnotises them and attempts to feed the famous monsters into his sausage maker. 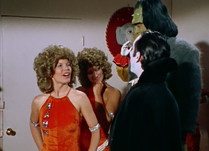 Add a photo to this gallery
Retrieved from "https://femalevillains.fandom.com/wiki/Baby_Doll_and_Arlene_Doll_(Monster_Squad)?oldid=202198"
Community content is available under CC-BY-SA unless otherwise noted.