Azami is the right hand of the film's main villain, Tsukiyo Nekogami. She does not speak much, but is exceptionally loyal.

Azami works to help achieve her mistress's goal of killing Tamayo, Tsukiyo's relative. Tamayo has a faithful servant of her own, however; a butlerdroid named Sukekiyo, who ultimately kills Azami by ripping her head off with his bare hands. 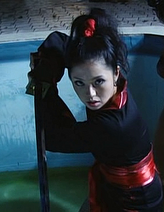 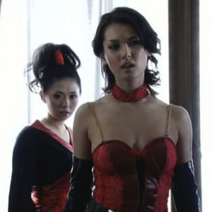 Always ready to defend her mistress...

Playing with another butler droid, Sukatoma, who they have captured... 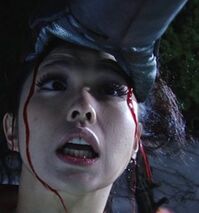 Add a photo to this gallery
Retrieved from "https://femalevillains.fandom.com/wiki/Azami_(Erotibot)?oldid=186196"
Community content is available under CC-BY-SA unless otherwise noted.