Ayana Minase is a bespectacled classmate of Tomo Yamanobe and Mafuyu Oribe in the animation The Qwaser of Stigmata, as one of the 12 apostles of Adept. She is the first Adept to show in the story.

When masquerading as the mysterious attacker, she dons a black cloak and a white mask that somewhat resembles a bird. Without her innocent facade, Ayana has her eyes narrowed, similar to a predatory cat.[1]

Qwaser of Magnesium: She is the Qwaser of magnesium, with which she created razor-sharp chakrams or chains that she could ignite and control at will.[1]

Ayana terrorized St. Mihailov's premises as a mysterious assailant that targeted girls and drained their Soma, often leaving them severely injured, before trying in vain to find where the Theotokos was held. Confronted by Sasha, she tried once more to find the icon by kidnapping Tomo, and in the ensuing fight she was mortally wounded by Sasha. She burnt herself instead of succumbing to the wounds, giving a first impression of the Adepts' fanatic zeal.[1]

Unexpectedly she re-appeared as a reanimated corpse when Friederich Tanner summoned her and other fallen Qwasers to fight Shinichiro Ōotori, against whom she was easily dispatched and burnt once more, this time apparently for good.[1] 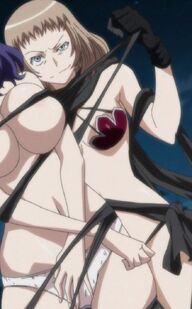 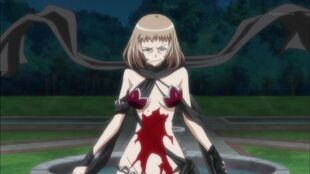 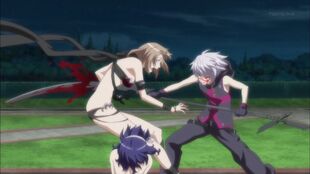 Add a photo to this gallery
Retrieved from "https://femalevillains.fandom.com/wiki/Ayana_Minase_(The_Qwaser_of_Stigmata)?oldid=128276"
Community content is available under CC-BY-SA unless otherwise noted.