Avery Hemmings (Michelle Borth) was the hidden villainess of "Trade", episode 9.18 of Law & Order: SVU (airdate May 6, 2008). She was a defense attorney who usually handled FCC violations, but took on the case of PJ Bartlett, who was accused of murdering his fiancee Jenna Ludlow. She was friends with PJ in college and became very aggressive in defending PJ, even going as far as to make a threat against ADA Casey Novak.

Her villainous reveal came during the episode's climax when the SVU squad found a video tape in the burned down apartment of Jenna Ludlow, showing that Avery was her murderer. She became obsessed with PJ in college, even going as far as to hire a private investigator to follow him and his girlfriends, believing they all only wanted PJ for his money. She confronted Jenna to get her to leave PJ, but when she refused, she killed her by hitting her with a lamp before setting her apartment on fire to cover her tracks. When the case went to court, Avery bribed a juror to stop PJ from being convicted.

As the detective prepared to play the tape for PJ and his father Pierson (who was also accused of conspiring to kill Jenna to stop her blackmail against him and PJ), Avery ordered them not to. When they refused, Avery hurried from the room just before she was shown killing Jenna. She fled to the roof and was standing on the ledge when the squad and PJ arrived, threatening to jump if they got closer. PJ tried to talk Avery down, who revealed her longtime obsession with him as well as her other villainous acts, claiming she did them out of love. Just when PJ was about to goad Avery down, Pierson screamed at her to get away from his son, accusing her of trying to destroy them. Avery then viciously blamed Pierson for causing all the trouble by sleeping with Jenna and getting her pregnant, allowing Jenna to blackmail them. After yelling for his father to stay out of it, PJ pulled Avery into an embrace. But at that moment, the evil Avery told Pierson that she wasn't going to let him hurt PJ again before pulling him off the roof with her, sending them both falling to their deaths. 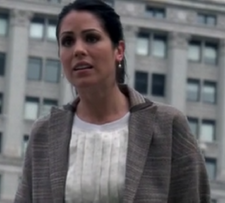 Avery confessing to her actions 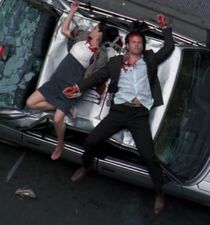 Avery and PJ's corpses following the former's suicide
Add a photo to this gallery
Retrieved from "https://femalevillains.fandom.com/wiki/Avery_Hemmings_(Law_%26_Order:_SVU)?oldid=168895"
Community content is available under CC-BY-SA unless otherwise noted.