Start a Wiki
watch 01:48
The Loop (TV)
Do you like this video?
Aunt Dahlia (Patricia Gage) is the main antagonist in the 1997 short story by R.L. Stine from the Goosebumps book series,"An Old Story", and the episode adaptation, of the same name, from the TV series Goosebumps.

In the book, she is a witch that goes around, claiming to be related to various families as a “great aunt“ then she ages their children with different foods (or drinks) with prunes, into senior citizens, then marries them off to her friends like, Lillian and Mimi, for a price. Tom then throws a pitcher of prune juice on her, making her body crumble to dust.

In the episode, she is the blood-related aunt to the episode’s protagonist, Jon and Tom. As in the book, she ages them with prunes and attempts to marry them off to her friends, Lillian and Mimi (presumably witches too) for a price. Tom throws a pitcher of prune juice on her, melting her skin, revealing her skeleton and then crumbling to dust, killing her. As in the book, she is a witch. 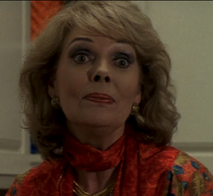 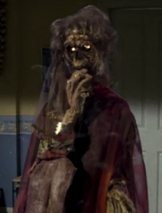 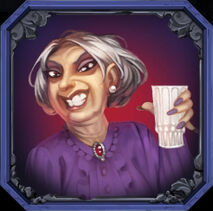 Add a photo to this gallery
Retrieved from "https://femalevillains.fandom.com/wiki/Aunt_Dahlia_(Goosebumps)?oldid=189685"
Community content is available under CC-BY-SA unless otherwise noted.