Start a Wiki
watch 01:39
The Loop (TV)
Do you like this video?
Audrey Burchill (Deidre Gillard-Rowlings) is the villainess of "Two Jakes and a Baby", episode 3.08 of Republic of Doyle (airdate February 29, 2012). Audrey was previously a serial kidnapper, working alongside Logan Hicks to abduct wealthy men to hold for ransom. Prior to the episode's events, Logan was arrested and sentenced to ten years in prison.

With Logan's sentence a month away from ending, Audrey decided to kidnap Logan's estranged daughter, Fiona Michaels, to make him reveal to her where he'd stashed their ill-gotten money. Audrey kidnapped Fiona from her boyfriend Smith Carson's house, working alongside Rodney Cooper (who had stolen the identity of Jake Doyle) and killing him when his mask fell off.

Logan and Jake (who had been arrested for inadvertently holding a bank hostage) were released from prison to aid in Fiona's recovery, with the police initially believing Fiona was kidnapped due to her being set to testify against Smith for selling drugs. Logan eventually escaped custody to find his daughter, with him and Jake encountering Audrey in her and Logan's old warehouse hideout, the villainess holding a bound and gagged Fiona at gunpoint. Audrey left the scene after telling Logan that he'd hear from her later, later sending the police a video of Fiona reading her demands: that Logan and Jake deliver a $10,000 ransom to a drop-off location, threatening to kill Fiona if the police got involved.

However, it was ultimately revealed that the ransom was a ruse in an attempt to kill Jake (and possibly Logan), as she placed an explosive in the metal can she'd arranged for the ransom money to be placed. Audrey later went back to Smith Carson's house looking for Logan's money stash, where she killed Smith by shooting him in the chest. The episode's climax had Jake, Logan, and Jake's father Malachy confronting Audrey in the warehouse again, with Audrey once again holding Fiona hostage. While Audrey considered killing the four in order to escape town with her money, Logan ultimately defeated Audrey by firing a bullet at her money, him having soaked the money in gasoline. Audrey, dismayed at the loss of her money, was held at gunpoint by Jake, and later arrested (off-screen). 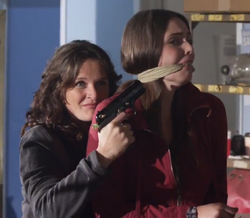 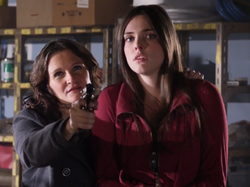 Add a photo to this gallery
Retrieved from "https://femalevillains.fandom.com/wiki/Audrey_Burchill_(Republic_of_Doyle)?oldid=206110"
Community content is available under CC-BY-SA unless otherwise noted.