Athena is introduced as one of the fighters inside a Krypto fight club operated by Richter Maddox, which catches the attention of Clark Kent and Chloe Sullivan (especially the former) when Titan--a Phantom Zone escapee--is shown as one of the combatants.

She is first seen coming out of the shower wrapped in a towel and dressing into a school girl attire with plaid mini-skirt, fishnet stockings and white top tied to expose her black brasiere.  A man approaches and they talk about the "big guy" until Athena tells him to leave. An alarm goes off and they grab guns and go out to see the "big guy," Titan, going berserk. They run away as Titan fights with... Clark Kent.

Later, Lois Lane goes undercover as a stripper at the site of the club, where she encountered Athena.  The two engage in apparent flirtation as Lois-claims she is in need of water for her car's radiator.   Again later, Lois is taking photos of the club surroundings, and the evil Athena.  Athena holds Lois at gunpoint, having caught on to Lois' mission.

Lois managed to take down the villainess, only for Maddox to appear and hold her at gunpoint before capturing her. Athena is shown in the episode's climax being informed about Titan killing Maddox, with Clark later killing Titan in one-on-one combat before rescuing Lois. Athena's fate isn't revealed following the climax's events. 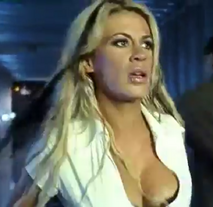 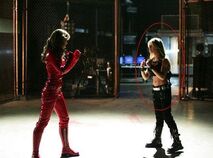 Retrieved from "https://femalevillains.fandom.com/wiki/Athena_(Smallville)?oldid=165651"
Community content is available under CC-BY-SA unless otherwise noted.