Start a Wiki
watch 01:51
The Loop (TV)
Do you like this video?
Ashy (Minami Tsukui) was an antagonist in the 2013 Japanese film "Zyuden Sentai Kyoryuger: Gaburincho of Music".

Ashy was a Dino Girls, who was a henchewoman along with Lamunea (Misaki Momose) .  They served Ferocious Knight D.  Ashy's name comes from the Japanese word "ashi", which means leg and relates to how she fights.

Ashy and Lamunea led an army of Zorima to attack a concert being held by the pop star Meeko, as she was capable of singing a song that woudl reawaken Tobaspino.  However, they were soon confronted by the Kyoryugers, who were attending the concert.  As Kyoryu Red escored Meeko away, Ashy and Lamunea were held off by Kyoryu Pink and Kyoryu Green, and Kyoryu Black and Kyoryu Blue respectively.

The two later retreated along with Deathryuger after their bos managed to overpower all of the Kyoryugers and abduct Meeko. 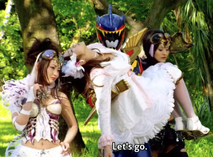 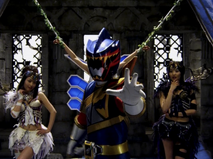 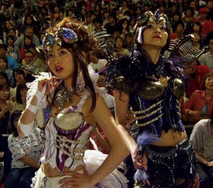 Add a photo to this gallery
Retrieved from "https://femalevillains.fandom.com/wiki/Ashy_(Zyuden_Sentai_Kyoryuger:_Gaburincho_of_Music)?oldid=164517"
Community content is available under CC-BY-SA unless otherwise noted.