The Female Villains Wiki
Register
Don't have an account?
Sign In
Advertisement
in: 2010s, Attempted Murder, Brunette,
and 12 more

Ashley Robinson (Allie MacDonald) is the villainess of the 2015 Lifetime film Trigger Point. She was a student at Chicago College and a member of the political activist group known as Coalition, with the leader being her lover, Jared Church.

The film's events have protagonist Callie Banner joining Coalition after speaking with Jared, joining their protest against Sterling Exton (the company responsible for Callie's father Miles losing his job) for their plans of demolishing historic building Cubberley House to build a new tower. Upon seeing Callie's budding friendship with Jared, Ashley appeared to become jealous of her. In a conversation with Coalition member Patrick Owens about the recent deaths of colleague Ben Prather and his mother Annette, which was ruled a murder-suicide committed by Ben, Ashley responded to Patrick's disbelief by claiming she could tell Ben had an intense side.

However, the film's progression would reveal that not only were Ben and Annette both murdered, but that Jared and Ashley were conspiring to commit the murders. Ben was revealed to have been a classmate of Jared's at private school Castleton, where Jared attended on a scholarship. Coalition member Tracy Campbell was also a student of Castleton with Jared, with Jared and/or Ashley having Tracy drowned in her pool after her father Edward was killed with a bomb constructed by Ashley (the same way Annette was killed). Their motivation was a belief that Ben and Tracy (both of whom grew up wealthy) would eventually give up activism and follow in their parents' footsteps, viewing them both as traitors to their cause.

After Ben and Tracy's deaths were ruled murder-suicides, Patrick became suspicious of Ashley due to her supposed alibi for both crimes: she claimed to have been in Houston visiting her mother, but said nothing about the massive flooding occuring there. Realizing Patrick was close to finding the truth, Jared had Ashley and his brother Kieran don masks and attack him and Patrick with baseball bats as they were leaving a protest, leaving Patrick hospitalized until he ultimately died of his injuries. Patrick was able to leave cryptic words of warning to Callie before his death, leading Jared to provide false aid to Callie as she investigated, with Jared fingering Ashley as the killer and having Kieran pose as an FBI agent to further the ruse.

Jared eventually sent Callie to follow Ashley, with the villainess leading Callie to the abandoned building where she constructed her bombs and mapped out her and Jared's next planned attack. After Callie called Kieran to come see the evidence, the evil Ashley used the opportunity to plant a cell phone bomb inside Callie's backpack, later meeting with Jared in a park to retrieve a flashdrive containing the evidence to their attack and a "script" she would need for said plan: to set off the bomb she planted on Callie when she was inside the Sterling Exton building, and frame Callie as the perpetrator. During the handoff, Jared confronted Ashley on her nervousness, responding to her concerns that they were moving too fast with their plan by arguing that Callie was closing in on the truth. After the meeting, Ashley used a duplicate key Jared gave her to break into Callie's house and plant bomb materials in her room and on her computer via the flashdrive. Ashley also typed a suicide note painting Callie as a vengeful bomber against Sterling Exton, and additionally made it appear that Coalition was a peaceful organization and that Callie was denoucing that form of protest.

As Ashley fled Callie's house, she was confronted by Callie's friend Brianna Heath, who recognized her before Ashley shoved her down and fled. As Brianna used the key Ashley dropped to go inside Callie's house and find the planted evidence, Kieran attacked Miles at the rehab clinic Callie sent him to in an attempt to kill him and stage his death as a suicide on Jared's order. Miles managed to fight back and subdue Kieran, discovering his connection to Jared and calling Callie to warn her as she arrived at the Sterling Exton office. Realizing that a bomb had been planted in her bag, Callie ran outside and managed to drop the bag into a manhole, doing so just before Jared was able to activate the bomb. Jared, Ashley, and Kieran were all placed under arrest, with Ashley making a full confession against Jared (off-screen) along with Kieran. 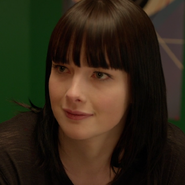 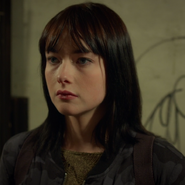 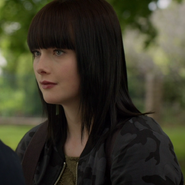