Nick has been corresponding with a young woman named Ashley Mercer, who is waiting for him on the outside.  After Nick dies in a prison fight, Rudy takes his place and meets Ashley when he is released.

They are attacked by Gabriel, the leader of a gang, and forces Rudy to help them rob a casino he used to work at.  Rudy reveals that he is not Nick, but Ashley continues to confirm he is and that she wrote to him knowing Gabriel was going to kidnap and force Rudy to assist in the robbery.

Rudy, while furious with Ashlye, is reluctantly forced to go along with his ruse.

Using the info from Nick's prison cell stories, Rudy is able to devise a robbery plan and informs where the biggest loot is hidden at the casino.

On the night of the robbery, Rudy breaks out of his holding in order to find a way to arm himself.  He stumbles upon Gabriel and Ashley and learns that they are lovers and partners in crime. The group robs the casino, each dressed as Santa Claus.  Rudy, hides the fact that he knows Ashley's secret.  Shots are fired and security guards and Santas are shot.  Ashley drives into the Casino and lets Nick/Rudy know she is in on the heist.

After the heist, Rudy is tied up and placed in the 18-wheeler turck.  They plan to drive him off the edge of a cliff in a burning vehicle with a little of the money so that officials will guess all had been burned.  After accidentally revealing too much information during an argument with Rudy, Ashley shoots and kills Gabriel.  Shortly after, Nick appears, having staged his death at the prison.

It is revealed that Ashley's real name is Millie Bobeck. and Rudy learns that the two had collaborated to rob the casino using Rudy and Gabriel and his gang.  Ashley had known the entire time who Rudy truly was.  Nick also informs Rudy that the prison stories were part of the set-up. After they tie Rudy to the steering wheel to drive off the cliff, he produces a knife he had gotten earlier, cuts his bindings, hot wires the car, sets it in reverse and crushes Nick.  With Ashley firing at him, he rams the fiery car into her and drives out as the car and Ashley go over the cliff. 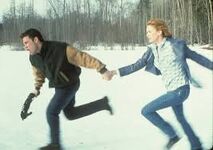 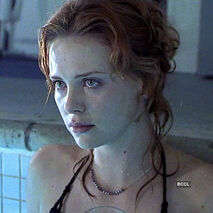 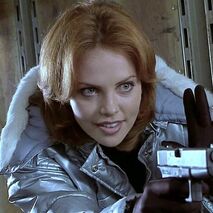 Add a photo to this gallery
Retrieved from "https://femalevillains.fandom.com/wiki/Ashley_Mercer/Millie_Bobeck_(Reindeer_Games)?oldid=137463"
Community content is available under CC-BY-SA unless otherwise noted.