Ashley Kirkwell (Kathleen Munroe) is the main villainess from "Purgatory," episode 3.10 of Motive (airdate May 10, 2015).

Five years prior to the episode's events, Ashley Kirkwell was the owner of a burlesque club known as Purgatory, as well the lover of plastic surgeon Garrison Osgood. The two of them, along with Ashley's business partner, Jason Irwin, and lawyer Charles Costello, colluded together to manufacture and sell ecstasy, with the profits later being used to fund Osgood's practice. Ashley was the object of Charles' affection, but seeing her with Osgood drove him to a jealous rage. While Ashley was in the lab, Charles inserted a chemical into the ecstasy mixture, which started a fire that disfigured Ashley. Following this, Ashley was tended to by Osgood, and she later took the fall for her partners.

Ashley spent five years in prison and was released on parole a week prior to the events. She visited Osgood, looking to rekindle their relationship, only for Osgood not to reciprocate. Enraged, Ashley took Osgood's cigar and laced it with PCP, and while he and partner/lover Lucy Everhill performed surgery, the pair became high due to the effects of the PCP, which led to Lucy and Osgood slashing themselves, resulting in their deaths. Ashley was encountered by Vega at the scene, but she gave a false name and left the scene.

Ashley later set her villainous, vengeful sights on Jason, who bought Purgatory during Ashley's incarceration and turned it into a strip club. She entered Jason's car and tortured him for information before shooting him to death. As revealed later on, Jason had told Ashley that he saw Charles leaving the scene as Ashley was in the lab during the fire, and after learning the truth about Charles, the vengeful villainess confronted Charles and knocked him out with a crowbar. She later tied up Charles and planned to set him on fire, first dousing him with gasoline and then dropping a lighter (just as Angie and Vega arrived) to set him ablaze. Vega was able to put Charles out with a fire extinguisher, and Ashley was arrested. During her interrogation, Ashley expressed sorrow that Charles survived the fire, and continued to show no remorse for her murderous actions, before asking to return to her cell. 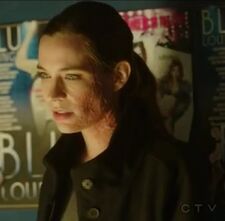 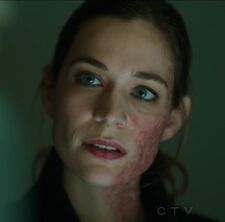 Add a photo to this gallery
Retrieved from "https://femalevillains.fandom.com/wiki/Ashley_Kirkwell_(Motive)?oldid=206556"
Community content is available under CC-BY-SA unless otherwise noted.