Start a Wiki
watch 01:51
The Loop (TV)
Do you like this video?
Ashley Bamford (Kelly Overton) is the main villainess from "There Might Be Blood," episode 3.06 of Psych (airdate August 22, 2008). She is the daughter of oil rig owner Billy Joe Bamford.

Knowing that her father's business was failing, and in an effort to prove herself to her father, Ashley decided to drill on a oil rig that was actually located on a fault line. She killed safety inspector Butch Hicks, who warned her of risks and attempted to stop her operation, and she also killed Christopher Renard, a geologist hired by Ashley, who also sent anonymous tips threatening to go to the authorities. Regarding Hicks' death, Ashley tampered with a crane, causing it to go loose and kill Hicks.

Ashley was revealed as the villainess when she encountered Shawn and Gus in Renard's office, where they were inspecting the maps of the rig. The pair originally thought that Billy Joe was the culprit, but at that moment, Ashley turned heel and pointed a gun at Shawn and Gus and locked them in a small room full of toxic materials. Later on, the evil Ashley encountered Chief Vick, along with Jules, Lassiter, and Coast Guard commander (and Vick's sister) Barbara Dunlap, where they learn that she was on the rig the night that Hicks was killed. When they see Ashley's gun, the cops charge at her, which led to a gunfight. After Shawn and Gus are freed, Shawn attempts to calm Ashley down, stating that he can sympathize with having an unappreciative father, and she did what she felt she had to do to save her father's business. Ashley lets her guard down, allowing Lassiter to subdue and arrest her. 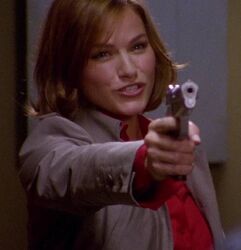 Ashley's villainous reveal
Add a photo to this gallery
Retrieved from "https://femalevillains.fandom.com/wiki/Ashley_Bamford_(Psych)?oldid=137402"
Community content is available under CC-BY-SA unless otherwise noted.