The Female Villains Wiki
Register
Don't have an account?
Sign In
Advertisement
in: 1970s, A Taste Of Her Own Medicine, Ambitious,
and 14 more

Ashiya was the sorceress supreme of the savage land of Skartaris who sought to use the technology of her former master to conquer. First Appeared Warlord (1976) #10 and died in #54.

Ashiya the Witch was a crone who had mastered her art when she met the evil would be ruler Deimos. Having assumed the form of her youthful beauty, Ashiya desired to become Deimos' queen once he used his technological weapons to conquer the primitive world of Skartaris. These plans were thwarted when Scartaris’ hero, the Warlord, killed Deimos.

Months later, while searching out a powerful necromantic artifact, the Mask of Life, Ashiya was captured by a group of warriors. Knowing her to be a evil sorceress, they were about to burn her alive when the well-meaning Warlord intervened and slew them all. The freed Ashiya duped Warlord into recovering the Mask for her. Taking the Mask to Deimos' corpse, Ashiya resurrected him. [Warlord 10]

Ashiya served Deimos in his plan to destroy Warlord by using an adult clone of his kidnapped infant son. Warlord was forced to kill the clone (whom both he & Deimos believed was his real son). Deimos was again slain by Warlord. Ashiya had taken pity on Warlord’s real son, switched him out, and placed him in the care of a simple woodsman and his wife. Still, she did not alert Morgan to his existence, choosing to keep this a secret for her own future advantage. [Warlord 19-21]

Several years later Deimos returned, albeit in a deformed state thanks to the continued power of the Mask of Life. Deimos summoned Ashiya to assist him in getting his true body back. Deimos had captured Warlord's grown daughter Jennifer, who was now in a cationic state from the trauma. Deimos tells Ashiya that he intends to make Jennifer his consort as a means of punishing his enemy Warlord. Ashiya was jealous and angry at not being chosen as his queen, but still feared Deimos. Ashiya casts a spell to transport Deimos to another warlock who then returns his body but steals his powers. Deimos begs Ashiya for help him fight Warlord, but she scornfully laughs at him - telling him Morgan’s son is alive. Ashiya then leaves Deimos to face the attacking Warlord alone. [Warlord 50]

After killing Deimos, Morgan left the still cationic Jennifer in the care of an ally, but that did not stop Ashiya from returning and using Jennifer for her own purposes. No longer subservient to Deimos, Ashiya now desired control of Deimos' technology to pursue her own goals of conquest. She required Jennifer's skills to learn how to command these scientific marvels. Ashiya magically removed Jennifer's catatonia while masquerading as Jennifer's mother to gain trust. Jennifer and Ashiya shared the principles of magic and science over the following days. Jennifer was an excellent student and teaching drained Ashiya’s power. [Warlord 53]

When Morgan returned to check on his daughter, he was attacked by a diminished, but still powerful Ashiya in the guise of his wife. Ashiya’s spells could not stop the enraged Morgan and he was about to kill Ashiya when Jennifer intervened. Jennifer, well aware of Ashiya’s ruse, wanted to keep her alive to gain more magical knowledge. Ashiya was the one being used the entire time. Ashiya refused to serve a mere mortal and the two battled. The Sorceress Supreme of her world, Ashiya was sure the outcome was in her favor. She was unaware though of the purpose of many of the machines in the room where they fought. Jennifer lured the arrogant but ignorant Ashiya between giant electrodes. Jennifer magically activated the machine, delivering a lethal bolt of electricity into Ashiya, reducing her to a pile of ash. Jennifer dismissively lamented “Your power was great – it is a pity”. [Warlord 54] 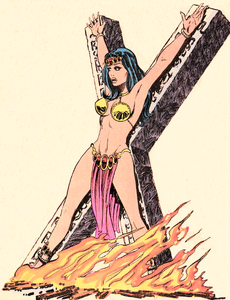 Evil Ashiya about to be burned at the stake

Ashiya is summoned by Deimos via incantation 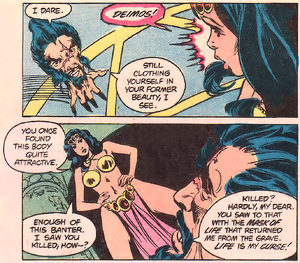 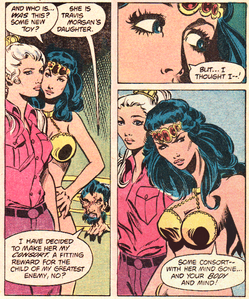 Pissed at not being chosen as queen 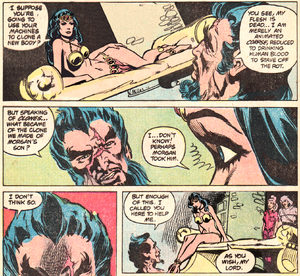 Will assist Demos in getting his true body back 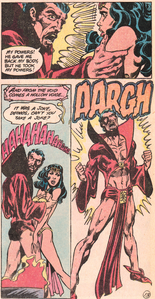 Deimos loses his powers and takes it out on Ashiya 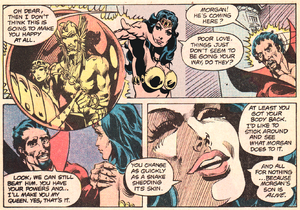 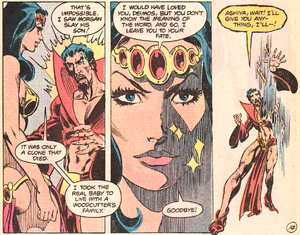 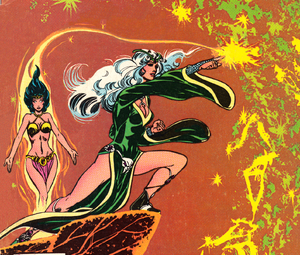 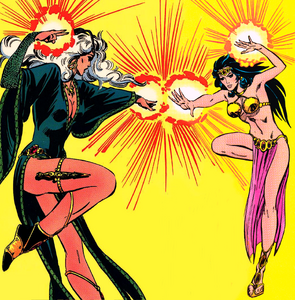 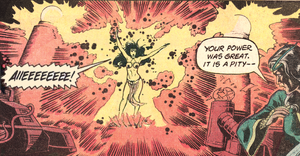 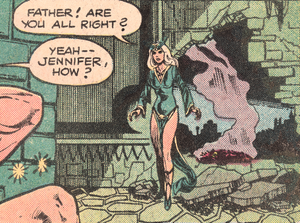 Ashiya reduced to pile of ashes (in background)
Community content is available under CC-BY-SA unless otherwise noted.
Advertisement