The Female Villains Wiki
Register
Don't have an account?
Sign In
Advertisement
in: 1940s, Blonde, Boots,
and 11 more

Asbestos Lady is a villainess, who appeared in Timely's Captain America Comics #63, courtesy of Stan Lee, Al Avison and (probably) Mike Sekowsky in 1947. Vicky Murdock, a blonde who wore a conveniently form-fitting green asbestos costume and purple hood to protect herself against the Human Torch.

Driven by a need to avenge the death of her twin brother, she stayed on the scene for two stories in the 1940s, then vanished until Roy Thomas tapped her for Invaders #22. That 1947 issue incorporated Asbestos Lady into the origin of one of the younger members of Marvel's World War II team, when she murdered a young boy's scientist parents to get their improved asbestos formula. The youngster ended up as the Human Torch's sidekick, Toro, and she ended up with the street melted around her boots. 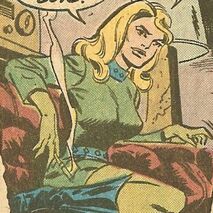 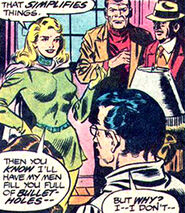 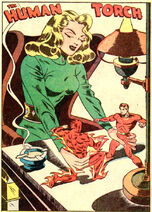 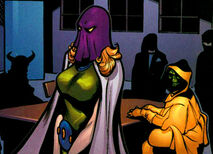