The Female Villains Wiki
Register
Don't have an account?
Sign In
Advertisement
in: Live Action Villainess, 1960s, Witch,
and 6 more

Asa Vajada was a princess of Moldavia who lived during the first half of the 17th century.  Asa was a witch in the service of Satan and she practiced her art along with a colleague named Igor Javutich (Arturo Dominici).

Asa's own brother, Kriavi Vajda was the head of the Holy Inquistion.  Capturing Asa and Igor, he tried them for witchcraft outside the family estate.  Before her sentence was carried out, Asa placed a curse on her brother's family line, shouting "It is I who repudiates you, and in the name of Satan I place a curse upon you.  Go ahead, tie me down to the stake, but you will never escape my hunger, nor that of Satan!"  The inquisitor had his men nail the Mask of Satan upon both Asa and Igor's faces and their bodies were burned at the state.  At the moment of her death, a terrible storm erupted and the Inquisitors fled the scene.  When the storm subsided, they placed Asa's body in the tomb of her ancestors.  Her coffin was outfitted with a glass window so that all who looked upon it would see the Mask of Satan staring back at them.  A giant cross was erected upon the coffin to ward off evil.

Two centuries later, two scientists named Doctor Thomas Kruvajan (Andrea Checchi) and Andre Gorobec (John Richardson) traveled by coach through Moldavia on their way to a conference in Mirgorod.  Their coach suffered a broken axle near the ruins of the Vajda family chapel and while the coachman affected repairs, Kruvajan and Gorobec decided to explore the ruins.  While inspecting the catacombs, they came upon Princess Asa's coffinl. A large bat flew out, startling Kruvajan.  In an attempt to kill the bat, he unwittingly struck the cross affixed to Princess Asa's coffin, as well as shattering the small glass window at the head of the casket.  Cutting himself on a splinter of glass, Kruvajan's blood dripped down onto the Mask of Satan, mysterioously bringing Asa back to life.

Though alive once again, she was still weak and was unable to rise from her coffin.  She used what little power she had regained to resurrect her lover Igor Javutich.  She then summoned Doctor Kruvajan back to her tomb, forcing him to give her his blood, making her even stronger.  Working through both Javutich and Kruvajan, she continued to wreak her vengeance against the Vajad family.  The prince and his heir, Constantine Vajda (Enrico Olivieri), were both killed in short order, but it was the prince's daughter, Katia Vajda (also Barbara Steele), that captured Asa's attention.  The twenty-one year old princess was the spitting image of the witch and Asa sought to take possession of her, transferring her essence into Katia's body.  Moments after completing the spell however, Kruvajan's student Andre Gorobec exposed her and the local villagers became aware that Asa was a witch.  She was pulled out of the chapel ruins and bound to a wooden stake whereupon she was set on fire and burned to death. 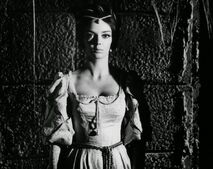 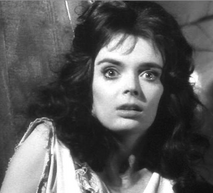 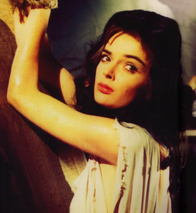 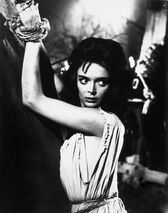 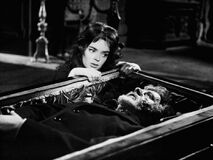 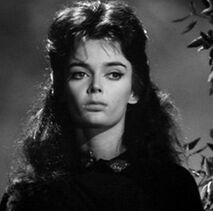 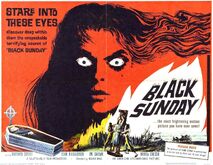